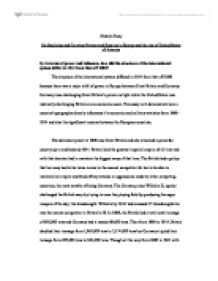 In terms of power and influence, how did the structure of the international system differ in 1914 from that off 1880?

History Essay On Declining and Growing Powers and Empires in Europe and the rise of United States of America Q. In terms of power and influence, how did the structure of the international system differ in 1914 from that off 1880? The structure of the international system differed in 1914 from that off 1880 because there was a major shift of power in Europe between Great Britain and Germany. Germany was challenging Great Britain's power outright while the United States was indirectly challenging Britain on an economic scale. This essay will demonstrate how a country's geography directly influences it's economic and military statistics from 1880-1914 and also the significant tensions between the European countries. The dominant power at 1880 was Great Britain and she remained a powerful country up to and beyond 1914. Britain held the greatest imperial empire of all time and with that she also had to maintain the biggest navy of that time. The British had a policy that her navy had to be twice in size to the nearest competitor for her to be able to maintain her empire and fend off any attacks or aggressions made by other competing countries, the most notable of being Germany. The German prince Wilhelm II, openly challenged the British navy by trying to even the playing field by producing the super weapon of the day; the dreadnought. Wilhelm by 1914 had amassed 17 dreadnoughts he was the nearest competitor to Britain's 29. ...read more.

Germany is bordered by several different countries and to protect itself from outside aggression, it needed a strong military to fend off any attacks made by its neighbors. Just like the other countries in Europe it had a large army but when the dependent variable was how much time, energy and resources put into the military determined its might when it came to a period of struggle and aggression. Yet, because Britain was a group of islands; an archipelago, it had one natural barrier to opposing armies that the other nations in Europe did not enjoy. It was the Atlantic Ocean and the English Channel. Because of that, an invading army would need a substantial navy first of all to invade but also to carry its armies across the channel. So at the beginning of the 1880's, Germany's army numbered 426,000 compared to the British 367,000 but by 1914, Germany was well ahead of Britain was a commanding 891,000 compared again to Britain's 532,000. Germany also had more total population then Britain in 1914 with 65 million to 45 million plus national income in Germany was 1 billion higher then Britain's 11 billion. Germany was the only nation that openly challenged Britain for her imperial might and colonial rule. The United States indirectly challenged Britain in several departments, all which were in economic sectors. The important thing to keep in mind when examining the American position on the economic scale is that the Americans were isolationists; they weren't interested in European politics. ...read more.

Economically it contributed to a relative small amount on the European stage and what it didn't bring in economic wealth to Germany; it brought in land and resources to the bidding table. Starting from 1880 to 1914 is the period of mistrust for the European states that were dotted across Continental Europe. There was an increasingly amount of tension and that can be seen by the sudden explosion of armies that countries raised. Great Britain was losing influence on the world stage and was losing ground in the areas that it had once dominated in. Germany had openly challenged Britain's power and decides to challenge her at the place that was most dear, on the sea. The United States was indirectly challenging Britain just because of the relative size of the US and that at that time; it was still a developing country. It was putting all of its money into its economy and building its cities. The United States was content with having a small army and also a small navy because of its geography and by virtue had two enormous bodies of water bordering it on both sides. Other European countries were gaining some influence and losing some influence but when it really came down to it, Great Britain the old super power was faltering and Germany was trying to replace Britain as the super power in Europe and America was creeping behind both of them, waiting for its chance to become the world's most dominant and influential power. P.S. Statistics were taken from The Rise and Fall of the Great Powers by Paul Kennedy. ...read more.