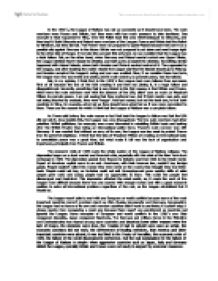 In the 1920&amp;acute;s, the League of Nations was not as successful as it should have been.

In the 1920�s, the League of Nations was not as successful as it should have been. The main members were France and Britain, but they were with too much pressure to take decisions. One example is what happened in Vilna, were the Polish took this area which belonged to Lithuania, and they kept it. Both Lithuania and Poland were members of the League. France and Britain told the Polish to withdraw, but they did not. The French were not prepared to upset Poland because they saw it as a possible ally against Germany in the future. Britain was not prepared to act alone and send troops right to the other side of Europe. If we take into account this only fact, we can consider that the League was a total failure. But, on the other hand, when Germany and Poland wanted control over Upper Silesia, the League decided that it should be divided, and both parts accepted the decision. Something similar happened with Aaland Islands, where both Sweden and Finland wanted control of it. ...read more.

These are the reasons for which I think that the League of Nations was a complete failure. As I have said before, the main reason or fact that took the League to failure was that the USA did not join it. And, besides this, the League was very disorganized. The two main members had other priorities. British politicians, for example, were more interested in rebuilding British trade and looking after the British Empire than being an international police force. France's main concern was still Germany. It was worried that without an army of its own, the League was too weak to protect France from its powerful neighbour. I think that the idea of Woodrow Wilson of creating an international body to consolidate peace was a great idea, but what made it fail was the lack of organization and importance, principally from France and Britain. The economic crisis of 1929 made the whole system of the League of Nations collapse. ...read more.

and Germany, temporarily); the League had no forces of its own and member countries didn't want to use theirs; it couldn't stop a strong country from conquering a weak one because there wasn't any punishment so countries just ignored the League. Some examples of European and world conflicts in the 1930�s are: Italy conquered Abyssinia, Japan conquered Manchuria, The Germans put military forces in the Rhineline and Czechoslovakia was shared among some countries and dissolved. Some other reasons were the lack of troops, the decisions were slow, the Treaties it had to uphold were seen as unfair, the economic sanctions did not work, the self-interest of leading members, that America and other important countries were absent, it was too liked to the Treaty of Versailles, the economic crisis of 1929, the failure of the world disarmament conference. But the real explanation for the failure of the League of Nations is simple: when aggressive countries such as Japan, Italy and Germany defied the League, specially Britain and France were not ready to support by economic measures. ...read more.