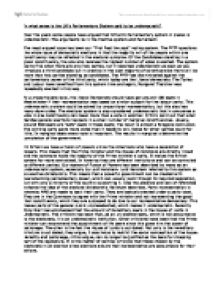 In what sense is the UK's Parliamentary System said to be undemocratic?

In what sense is the UK's Parliamentary System said to be undemocratic? Over the years some people have argued that Britain's Parliamentary system in places is undemocratic. The arguments lie in the Elective system and Parliament. The most argued issue has been our "First Past the post" voting system. The FPTP questions the whole issue of democratic elections in that the majority will of the people within one constituency may be reflected in the electoral outcome. Of the Candidates standing in a given constituency, the one who receives the highest number of votes is elected. The system works fine when there are only two parties, but it becomes undemocratic as soon as you introduce a third candidate but in practice in the vast majority of constituencies there will be more than two parties standing as candidates. ...read more.

Critic's point out that what decides general elections happens in a small number of marginal constituencies. Usually, around 500 seats are "safe" seats in these seats; the result is almost a foregone conclusion. The winning party gains more votes than it needs to win. Votes for other parties count for little. In marginal seats every vote is important. The results in marginal s determine the complexion of the government. In Britain we have a fusion of powers unlike the Americans who have a separation of powers. This means that the Prime minister and the House of commons are directly linked and the commons holds the majority of the Prime minister s party. ...read more.

Recently Tony Blair has emphasised that the amount of Hereditary peers in the House of Lords in Undemocratic. The criticism has been that, as an un-elected body, which is not accountable to the electorate, it is an undemocratic institution. Other criticisms have been that the Prime minister can recommend the appointment of life peers since this gives him the power of patronage. The other is the fact the House of Lords is out dated. Not only is the hereditary principle is out dated, they argue, it also helps to restrict the social composition of the house. Heredity and patronage, critics argue, can no longer be justified as the basis for choosing part of the legislature. It is the matter of political principle that those chosen by the electorate in an election since elections ensure that representative are accountable for their actions. ...read more.