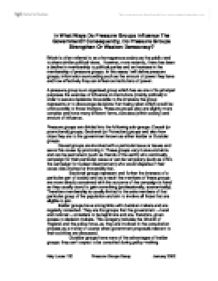 In What Ways Do Pressure Groups Influence The Government? Consequently, Do Pressure Groups Strengthen Or Weaken Democracy? Britain is often referred to as a homogenous society as the public tend to share similar political views. However, more recently, there has been a decline in membership to political parties and an increase in the membership of pressure groups. In this essay I will define pressure groups, information surrounding such as the amount of power they have and how effectively they can influence institutions of power. A pressure group is an organised group which has as one of its principal purposes the exercise of influence on institutions (mainly political) in order to secure decisions favourable to the interests the group represents or to discourage decisions from being taken which would be unfavourable to those interests. Pressure groups also are slightly more complex and have many different forms, statuses (within society) and amount of influence. Pressure groups are divided into the following sub-groups: Causal (or promotional) groups, Sectional (or Protection) groups and also how close they are to the government known as either Insider or Outsider groups. Causal groups are involved with a particular issue or issues and serve this cause by promoting it. These groups vary in size and aims and can be permanent (such as friends of the earth) ...read more.

These methods vary from insider to outsider groups. Insider groups use the following methods: Sponsorship of MP's (see below); make direct links with ministers; participate and testify in official committees; represent their group on quango's; influence parliamentary standing committees to amend legislation. Insider groups typically seek influence in the first 2 institutions of access, as they are able to do this. These two are also the most effective pressure points of the seven. Outsider groups use the following methods: public demonstration; petitions; campaigns of civil disobedience; media campaigns; illegal activities to achieve publicity. Outsider groups typically use the more 'illegitimate' methods of influence, as this is the only way to gain public support and therefore more power. It also depends on the institution they are pressurising. There are 7 institutions where pressure groups apply pressure to influence them. These are: The Executive and Civil Service - which is the most effective area for pressure groups to exert influence as it gives expert opinions (although biased) and they can gauge opinion, prior to publication of upcoming policies; Parliament (MP's and Lords) - by sponsoring MP's and engaging them as parliamentary consultants, involving them if they have personal interests in the group, lobbying MP's and Lords and making appearances before select committees to give evidence which is fairly influential since the televising of proceedings; The ...read more.

Pressure groups improve the accountability of decision makers to electorates if enough influence is made. Although it's undeniable that pressure groups play a vital role in British politics particularly in today's less differential society, perhaps it's not the suggested one of the pluralist model. For example, pressure groups do improve participation but in an unequal way, benefiting the powerful and organised and disadvantaging the weak and unorganised. The groups themselves may not be representative of their members as many members' views are ignored if they don't comply with the ideologies of the leaders or decision makers of that group. The methods of influence some groups use increase social discontent and political instability by intensifying social frustration and injustice felt by certain sections of the population. This can ignore the good of the whole of the community and this kind of civil disobedience can't be justified in today's democratic system. In conclusion, pressure groups can both detract from and strengthen democracy to a certain extent. Pressure groups are an essential dimension of any democracy, yet they can endanger it if sectional groups undermine the public interest or if the methods they use are corrupt or intimidating. Katy Lucas 12D Pressure Groups Essay January 2002 ...read more.