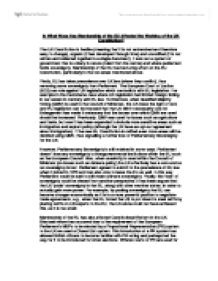 In What Ways Has Membership of the EU Affected the Working of the UK Constitution?

In What Ways Has Membership of the EU Affected the Working of the UK Constitution? The UK Constitution is flexible (meaning that it is not entrenched and therefore easy to change), organic (it has developed through time) and uncodified (it is not written and collected together in a single document). It sets out a system of government that is unitary in nature (ruled from the centre) and where parliament holds sovereignty. Membership of the EU has had a big effect on the EU Constitution, particularly in the two areas mentioned above. Firstly, EU law takes precedence over UK law (where they conflict), thus removing some sovereignty from Parliament. The European Court of Justice (ECJ) can rule against UK legislation which contradicts with EU legislation. For example in the Factortame case where UK legislation had limited foreign fishing in our waters in contrary with EU law. Furthermore, when Qualified Majority Voting (QMV) is used in the Council of Ministers, the UK loses the right of veto and EU legislation can be imposed that the UK didn't necessarily vote for. ...read more.

Finally, this 'loss' of sovereignty could be viewed from another perspective; it has been argued that the UK 'pools' sovereignty in the EU, along with other member states, in order to actually gain more power. For example, by pooling sovereignty the EU can become stronger economically as it is in a more powerful position to negotiate trade agreements, e.g., when the EU forced the US to put down its steel tariffs by placing tariffs on US exports to the EU; the UK alone could not have achieved this, as it is too small. Membership of the EU has also affected Constitutional Reform in the UK. Electoral reform has occurred due to the requirement of the European Parliament's MEPs to be elected by a Proportional Representation (PR) system. In the UK we used a Closed List system. This introduction of a PR system has allowed British citizens to become familiar with PR voting and perhaps led the way for it to be introduced for other elections. Different sorts of PR are used for other elections in the UK, e.g., STV for the Northern Ireland Assembly. ...read more.

as the EU encourages the ideal of liberal democracy. At present the House of Lords is not liberally democratic because it is unelected, and reform might be considered based on European examples such as the Bundesrat in Germany. In conclusion, membership of the EU has certainly had big effects on the operation of the UK Constitution. However, in today's globalised world, national sovereignty will never be complete as all countries now rely on global trade and investment and by transferring sovereignty to the EU it could be argued that the UK is controlling its power in the globalised world. As for the future implications of EU membership for the UK Constitution, if the EU Constitution is signed and the EU continues to expand more decisions will be made using QMV, signifying the shift of more sovereignty from Westminster to Brussels. The prospect of a federal Europe as envisaged by some would certainly have profound effects on the UK constitution, however, with 27 plus members in the future, a federal Europe would be huge and perhaps too big to agree to such a large change. ...read more.