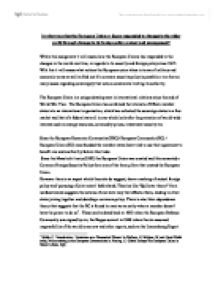 In what ways has the European Union or Japan responded to changes in the wider world through changes in its foreign policy content and management?

In what ways has the European Union or Japan responded to changes in the wider world through changes in its foreign policy content and management? Within this assignment it will assess how the European Unions has responded to the changes in the world overtime, in regards to its security and foreign policy since 1945. With this it will assess what actions the European union takes in terms of military and economic terms as well as find out if a common security policy is possible or are the too many issues regarding sovereignty that acts as constraints limiting its authority. The European Union is a unique development in international relations since the end of World War Two. The European Union has combined the interests of fifteen member states into an international organisation, which has collected the sovereign states in a free market and that of a federal state all in one which look after the protection of world-wide interests such as energy resources, commodity prices, investment security etc. Since the European Economic Community (EEC)/ European Community (EC) / European Union (EU) was founded the member states have tried to use their agreement to benefit one and another by factors like trade. Since the Maastricht treaty (1992) the European Union was created and this cemented a Common Foreign Security Policy from one of the three pillars that created the European Union. ...read more.

within the intergovernmental conference at the time of the conflict and later still the Maastricht Treaty's ramification also made the matter even more so complicating as well as the issues around the Soviet dominated territory. The fact that most countries wanted to maintain the status quo while encouraging the democratisation and liberalisation of the area meant that there was little immediate support for allowing the minorities to have their say. This led to the conflicts and in the end at best, to put the "EC/union in a muddle" with what should be happening and what policies should be carried out. It would be fair to say Yugoslavia was an awkward situation mainly due to the fact EC/EU countries bordered Yugoslavia and would have feared being dragged into the conflict however it needed to be resolved. This of, which was left to the EC and the UN and both the WEU and NATO took back-up roles, which with hindsight, shows a "serious overconfidence"6 of its resources and power. It was Dominique Moise who wrote recently that "US fights the UN feeds and the European Union funds"7. The E.U's foreign policy in the Balkans at this precise time is also very topical and is an important factor in its foreign policy. ...read more.

According to Peters if the EU is going to assist in helping in maintain peace in the region it has to work with America rather than setting up rival initiatives in the region with each other and America. If this can be done then maybe it will also help in constructing a Common Foreign Security Policy for the EU. Overall Europe has had to modify policies to adapt to the changing political challenge in respect to both the Balkans and the Middle East. They are both volatile situations that make it difficult for any state to solve. Previously when the EU/EC was first set up joint intervention in these conflicts wouldn't have occurred under the name of the EU. The European Union has become more political within the world as well as having more power within the European Union member states. This power of the EU is still limited and without a European army or military task force that provides back up for the EU, the EU will never become as influential as America or other states in terms of backing up its diplomacy with force. A military force could be argued to be the next step to a common European Foreign Security Policy and is more likely than ever however there are many that believe such as Peter Foot, that say this will be impossible. This is because of the consequences on states sovereignty and the political implications of creating a European Superstate. ...read more.