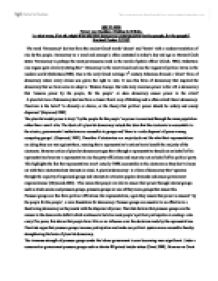 In what ways, if at all, might it be said that democracy ensures power by the people, for the people?

SSCPL2080 Power and Decision-Making in Britain. In what ways, if at all, might it be said that democracy ensures power by the people, for the people? Rachael Fowler-251152 The word 'Democracy' derives from the ancient Greek words 'demos' and 'kratos' with a modern translation of rule by the people. Democracy as a word and concept is often contested in today's day and age as Bernard Crick states 'Democracy is perhaps the most promiscuous word in the world of public affairs' (Crick, 1962). Robertson also argues quite similarly stating that ' Democracy is the most valued and also the vaguest of political terms in the modern world.'(Robertson,1986). Due to the early Greek writings 5th century Athenians formed a 'direct' form of democracy where every citizen was given the right to vote. It was this form of democracy that inspired the democracy that we have come to adopt in Western Europe .But who truly exercises power in the UK is democracy that 'ensures power by the people, for the people' or does democracy ensure power to the elites? A pluralist view of democracy derives from a classic liberal way of thinking and is often called liberal democracy. ...read more.

However the reality or an elitist reality would be that although a select committee is democratic as it acts as a power check on government, government ultimately control the outcome as MP's which are controlled by party whips who will want an out come that can align with party policies. Quangos can also used as a bribery tool by whips to persuade MP's to the party's way of thinking. Pluralists believe that interest groups 'compete on a level playing field' and everyone has the chance to voice their opinions, however ' what a group achieves depends on it's resources and it's decibel rating' (Hill,2005). However elitists argue that this is not the case as government is more likely to use pressure groups that adhere to government policy. After examining pluralist democracy and elitism, it could be said that democracy does ensure power however it's not always by the people sometimes by an elite for the people. In the UK there exists a number of democratic institutions, however the question is are they controlled by a 'non-decision' process which as Hill (2005) can not be proved as we cannot study it. ...read more.