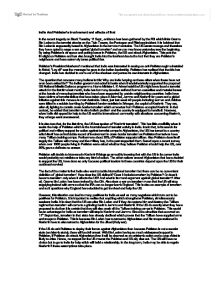 India And Pakistan&amp;#146;s Involvement and Terrorism

India And Pakistan's Involvement and effects of that In the recent tragedy on Black Tuesday 11 Sept., evidence has been gathered by the FBI which links Osama Bin Laden to the terrorist attacks on the Twin Towers, the Pentagon and Pittsberg incident. It is beleived that Bin Laden is supposedly based in Afghanistan in the remote mountains. The US wants revenge and therefore they have opted to wage a war against 'global terrorism' and as you may know yesterday saw the beginning. By using Pakistan's air space and putting bases in Pakistan, the US can attack Afghanistan. This puts the limelight on Pakistan and has also brought India into the forefront due to the fact that they are Pakistan's neighbours and have extremely tense political ties. Pakistan's President Musharraf mentioned that India was interested in seeing an anti-Pakistan regime installed in Kabul. "Lay off" was the message he gave to the Indian leadership. Pakistan has realised that the tide has changed. India has decided to come out of the shadows and pursue its own interests in Afghanistan. The question that concerns many Indians is this: Why are India harping on these offers when these have not even been asked for? The Indian government acted in haste when it wholeheartedly supported the proposed US National Missile Defence programme. ...read more.

How does the US define it? Does it include terrorism by Pakistan? Or does it become terrorism only when it affects the US? And what is its moral argument against global terrorism? After all, Osama bin Laden has been trained by the CIA. Also does a war on terrorism mean that the US will stop supplying Ireland with arms so that the IRA can no longer b**b England. This is also an example of terrorism and so it questions why England have decided to get involved and help the US. However, this situation can lead to many positives for India as well as many negatives which turn out to be positives for Pakistan. It is important to realise that anything which strengthens Pakistan, simultaneously weakens India. It is clear that the US are after Bin Laden and if they do capture him and destroy the Taliban regime then terrorism will come to a grinding hault in Jammu and Kashmir. If the US do exactly what they have proposed to do then it is certain that they will also crush all the Taliban training camps in Pakistan. This would be an advantage for India as terrorism will stop in Kashmir and Jammu. Since the atrocities that occurred on 11th September, terrorism in that state has already declined which proves that the Taliban have supplied arms and troops to Pakistan. ...read more.

However, as the US is only interested in ''furthering its own strategic interests'' and assuming that the Taliban is not completely destroyed, India ''will have to bear the consequence of the war long after the Americans have fought and gone''. Pakistan at present have not made any wrong moves and are to become empowered to a certain degree as their sanctions have been lifted which means more to Pakistan as they will get continuous loans where as India will just get short term financial boosts. The Pakistani CID will be pumped in with money so that they can monitor terrorism and anything emanating from Afghanistan. Hence, Pakistan can use their CID against India for purposes such as Kashmir. The worst long term effect on India, assuming Pakistan don't go wrong, is that the US will be a long term ally with Pakistan. So when a feud occurs between Pakistan and India, the US will be more sympathetic towards Pakistan and most probably help them. India have been raising this issue for decades, providing the US with proof of Pakistani involvement. But it did not initiate any action against terrorism until it visited them on home grounds. Had it taken terrorism as seriously as it is doing now, the attacks on the twin towers may not have taken place. But even now, the US has not spared any thought for the cross-border terrorism that affects India and so the effects may or may not benefit India. ...read more.