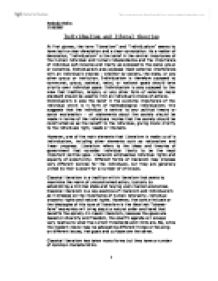 At first glance, the term "liberalism’’ and ‘’individualism" seems to have both a clear denotation and a clear connotation. As a matter of denotation, "individualism" is the belief in the central importance of the human individual and human independence and the importance of individual self-reliance and liberty as opposed to the social group or collective. Individualism also opposes most external interference with an individual's choices - whether by society, the state, or any other group or institution. Individualism is therefore opposed to communal, group, societal, racial, or national goals should take priority over individual goals. Individualism is also opposed to the view that tradition, religion, or any other form of external moral standard should be used to limit an individual's choice of actions.

However, one of the main elements that Liberalism is made up of is individualism, including other elements such as rationalism and linear progress. Liberalism refers to the ideas and theories of government that consider individual liberty to be the most important political goal. Liberalism emphasizes individual rights and equality of opportunity. Different forms of liberalism may propose very different policies for the individuals, but they are generally united by their support for a number of principals.

Classical liberalism is a tradition within liberalism that seeks to maximize the realm of unconstrained action, typically by establishing a minimal state and relying upon market economies. Classical liberalism is a key example of liberalism and individualism as it stresses on the importance of human rationality, individual property rights and natural rights. However, the core principals or the ideologies of this type of liberalism is the idea that ‘’laissez-faire’’ economics will bring about a natural order and hand that benefits the society. In classic liberalism, because the goals are based on diversity and freedom, the specific agenda will always vary relative to what the current thresholds and limits are. So, while the modern liberal may be advocating different things or focusing on different issues, the goals and purpose are the same.

Classical liberalism has taken many forms but they have a number of common characteristics.

One of the main characteristics of classical liberalism is egoistical individualism. They view human beings as rationally self interested creatures, who have a pronounced capacity of self reliance. The society is therefore seen to e atomistic, composed of a collection of largely self-sufficient individuals meaning that the characteristic of the society can be tracked back to the more fundamental features of human nature. Egotistical liberalism stresses that all persons are the absolute owners of their own lives, and should be free to do whatever they wish with their persons or property. So it's a broad array of related ideas and theories of government that consider individual liberty to be the most important political goal. The Egotistical Liberalism is the idea of "Whatever benefits me!" It is the "Me" generation that believes everyone else should work and see that "Me" get's their wants and needs met.

Alternatively, Classical liberals’ believe in negative freedom. The individual is free insofar as he or she is left alone, not interfered with or coerced by others. Freedom in this sense is the absence of external constraints upon the individual.

For classical liberals, the state is regarded as best as in a ‘necessary evil’ meaning that the sate is evil in that imposed a collective will upon the society by limiting the freedom and responsibilities of the individuals. Finally, Classical liberals have an optimistic view of civil society. They argue that civil society is only deemed to be a ‘realm of freedom’ by comparison to the state which is a ‘realm of coercion’ but it is also seen to reflect the principal of balance or equilibrium. This is most clearly expressed in the classical liberals’ belief in a self-regulating market economy.

In my point of view, a classical liberal would not want the government saying who could marry or who could not - or interfering with what substances the individuals could ingest. A Classic liberal would encourage freedom of movement for immigrants an open door policy more or less. But they would strenuously oppose government paying for the support of immigrants. In fact - they'd do away with public education if they could and give the saved tax money back to the earners and let them choose how and where to educate the kids.

Modern liberals’ ideas are related to the further development of industrialization. Industrialization had brought about a massive expansion of wealth for some, but was accompanied by the spread of poverty and ignorance and diseases. Moreover, social inequality became more difficult to ignore as a growing industrial working class was seen to be disadvantaged by low pay, unemployment and degrading living and working conditions. However, modern liberalism has been views in many ways.

Classic liberalism in particular has argued that it effectively broke with the principals and doctrines that had previously defined liberalism. They argued that it abandoned individualism and embraced collectivism. Nevertheless, modern liberals have been at pains to point out that they built on and rather than betrayed classical liberalism. In this view, whereas classical liberalism is characterized by clear theorically consistency, modern liberalism represents a connection between a new and old liberalism and thus embodies ideological and theoretical tensions.