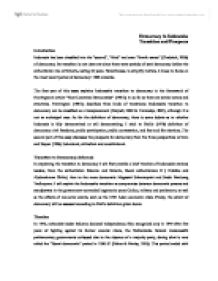 Indonesia: Transition and Prospects for Democracy

Democracy in Indonesia: Transition and Prospects Introduction Indonesia has been classified into the "second", "third" and even "fourth waves" (Chadwick, 2006) of democracy. Its transition is not clean-cut since there were periods of semi-democracy before the authoritarian rule of Suharto, lasting 32 years. Nevertheless, to simplify matters, I chose to focus on the most recent period of democracy: 1999 onwards. The first part of this essay explains Indonesia's transition to democracy in the framework of Huntington's article "How Countries Democratise" (1991b) in so far as there are similar actors and structures. Huntington (1991b) describes three kinds of transitions; Indonesia's transition to democracy can be classified as a transplacement (Haryadi, 2002 & Tanuredjo, 2007), although it is not an archetypal case. As for the definition of democracy, there is some debate as to whether Indonesia is fully democratized or still democratizing. I stick to Dahl's (1978) definition of democracy: civil freedoms, public participation, public contestation, and free and fair elections. The second part of this essay discusses the prospects for democracy from the three perspectives of Linz and Stepan (1996): behavioral, attitudinal and constitutional. Transition to Democracy: Reformasi In explaining the transition to democracy I will first provide a brief timeline of Indonesia's various leaders, from the authoritarian Sukarno and Suharto, liberal authoritarians B J Habibie and Abdurrahman Wahid, then to the more democratic Megawati Sukarnoputri and Susilo Bambang Yudhoyono. I will explain the Indonesia's transition as compromise between democratic powers and standpatters in the government-controlled hegemonic party Golkar, military and parliament, as well as the effects of non-actor events, such as the 1997 Asian economic crisis. Finally, the extent of democracy will be assessed according to Dahl's definition given above. ...read more.

The government policy of political openness, coupled with economic growth and improvement in education resulted in the rise of the opposition. Liberal reformers in government The liberal reformers in government emerged with the change of leadership. When Suharto resigned in 1998, Habibie took over as interim president. He pursued a "remarkably steady course toward democracy" by liberalising the press, labour unions and political parties (New York Times, May 28, 2000). However, he was accused of corruption and violations of human rights (New York Times, October 20, 1999). After Habibie, Wahid too promised to lift the Indonesian economy out of its depression after the 1997-8 Asian financial crisis. However, he too was impeached for corruption. Although Habibie and Wahid had democratic and liberal intentions, there were still "powerful hangover elements" (Chadwick, 2006) from the pre-transition regime. Golkar continued to have seats in parliament, and its support came from the same businesses before and after transition. Also, most of the leaders in Golkar remained in the party after transition, leading to divisions between the standpatters and liberal reformers. Stand-off A governmental crackdown occurred in mid-1996 on Megawati's pro-democracy movement. Megawati's supporters occupied the PDI Headquarters in Jakarta, to defend her as the PDI leader. A riot broke out and there was a crackdown by the government (B., 1996). After this event, PDI-P broke away and won greater support to win the 1999 elections. Compromise In Indonesia's transition, there was no explicit negotiation, but instead more of a compromise on each power. The democratic moderates accommodated the standpatter elite, who were already weakened or eliminated, leaving the liberal reformers and democratic moderates more space to make reforms and introduce democratic measures. ...read more.

If citizens have power, they can hold their government accountable. On the other hand, the military may have had its seats removed from parliament, but there is still no absolute civilian rule over the military. There are still "hangover elements of the old regime" (Chadwick, 2006), which can be used to the advantages of the new democratic elite. For example, Robison (2002) argued that Megawati nurtured links with some "New Order military-political elite" to gain support for her presidency (as cited in Chadwick, 2006). The military is not fully funded by the government; it is still linked extensively to businesses and charity organizations in its name, started in the Suharto era. As such, the military is not completely subject to civilian rule. A law passed in 2004 ordering the military to sell off their business interests by 2009 (Human Rights Watch, 2007). However, the reform is not complete and contains exceptions. Due to human rights abuses, continued military involvement in the economy and hence, incomplete civilian rule over them may prove to be a problem in democratic consolidation. Conclusion Behavioral, attitudinal, and constitutional views were used to classify various aspects of democratic consolidation. The features indicating a "long life" for democracy in Indonesia are: active civil society, increased public participation through decentralization, and an effective state bureaucracy. On the other hand, the following features may "shorten the life" of democracy: feudal and Javanese culture, rules to limit public contestation, and the power still retained by the military. It is not easy to say whether Indonesia's democracy will survive as only time will tell. If feudal culture dissipates with the advent of globalization and the adherence to different norms, and if the government manages a complete reform of the military, then it is reasonable to say that Indonesia's democracy will last for a long time to come. ...read more.