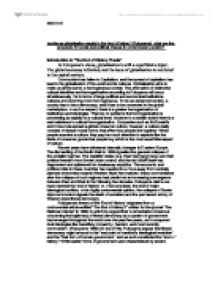 Insofar as globalisation results in the 'end of history' (Fukuyama), what are the prospects for social and political change in contemporary society?

Insofar as globalisation results in the 'end of history' (Fukuyama), what are the prospects for social and political change in contemporary society? Introduction to 'The End of History Thesis' In Fukuyama's views, globalisation is still a superficial subject. The global economy is limited, and the issue of globalisation is restricted to the capital markets. Communism has fallen to Capitalism, and the spread of capitalism has lead to the globalisation of the world and its cultures. Globalisation aims to make us all the same, a homogeneous society. The affirmation of distinctive cultural identities and homogenisation according to Fukuyama will occur simultaneously, for in terms of large political and economical institutions, cultures are becoming more homogeneous. To be an advanced society, a country has to be a democracy, and it has to be connected to the global marketplace. In such a respect, there is a greater homogenisation of institutions and ideologies. There is no evidence that homogenisation is proceeding as rapidly on a cultural level, however to a certain extent there is a real resistance to cultural homogenisation. Companies such as McDonald's and Coca-Cola spread a global consumer culture, however, a culture really consists of deeper moral norms that affect how people link together. When people examine a culture, they pay too much attention to aspects like the kinds of consumer goods that people buy which is the most superficial aspect of culture. ...read more.

Since Islamic extremists unhappy with the existence of Western civilization evidently committed the successful attack on the centre of global capitalism, and observers have been handicapping with the Huntington "clash" view over Fukuyama's "end of history" hypothesis. Fukuyama's version of Hegelian essentialism asserts that the human desire for individual 'recognition' drives a universal history in the direction of such a singularity. His argument, like Huntington's, is that the national societies of the world have moved or are moving towards a political culture of liberal democracy. Contentiously, Fukuyama is quite clear that liberal democracy implies a commitment to market capitalism because these guarantee individual rights in the economic sphere. It is the culture rather than the practice of liberal democracy that is critical. "What is emerging victorious...is not so much liberal practice, as the liberal idea. That is to say, for a very large part of the world, there is now no ideology with pretensions to universality that is in a position to challenge liberal democracy" (1992:45, original italics). There is a set of cultural attributes that must accompany economic modernization. These include a greater degree of individualism, understood as people being evaluated based on their achievement rather than in terms of inherited status. According to Fukuyama, recent discussions of globalisation seem to assume that globalisation is going to be much more homogenising than it really is. ...read more.

Giddens' work links the process of globalisation with the development of modern societies. Giddens' main message is that a modern society is not defined entirely by its economic base but by the fact it is a nation state. Fukuyama's celebration of the success of liberalism is problematic, according to Giddens, and merely a 'mirage'. Society must continue to progress, the idea of the end of history is premature; our utopia is not in sight as yet. "Modernity has a cultural basis. Liberal democracy and free markets do not work everywhere. They work best in societies with certain values whose origins may not be entirely rational. It is not an accident that modern liberal democracy emerged first in the Christian west, since the universalism of democratic rights can be seen as a secular form of Christian universalism." (Fukuyama, 2003) 1 Neo-Marxists argue that the culture industry blindfolds Western society away from the rest of the world, which is suffering from poverty, disease and famine. Fukuyama's idea that society as a whole is getting better is therefore merely deceptive. However, a society which lacks the political wool drawn over their eyes to an extent in order to maintain civilised day-to-day actions would be a society surviving on turmoil. One must possess optimism in order to survive an existence in such cultures. The idea of the end of history may be premature, but it still gives us the hope that our own individual existences lead to something more ultimate. 1 From www.guardianunlimited.com, Francis Fukuyama's piece on Iraq affairs, May 2003. 000213541 ...read more.