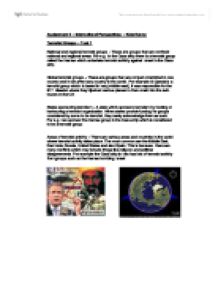 Assignment 3 - International Perspectives - Kate Kenny Terrorist Groups - Task 1 National and regional terrorist groups - These are groups that are confined national and regional areas. For e.g. in the Gaza strip there is a terrorist group called the Hamas which undertake terrorist activity against Israel in the Gaza strip. Global terrorist groups - These are groups that are not just constricted to one country and it can affect any country in the world. For example Al Qaeda is a terrorist group which is based in Iraq (middle east), it was responsible for the 9/11 disaster where they hijacked various planes to then crash into the twin towers in the US. States sponsoring terrorism - A state which sponsors terrorism by funding or harbouring a terrorist organisation. When states provide funding for groups considered by some to be terrorist, they rarely acknowledge them as such. For e.g. Iran sponsor the Hamas group in the Gaza strip which is considered to be a terrorist group. Areas of terrorist activity - There are various areas and countries in the world where terrorist activity takes place. The most common are the Middle East, East Asia, Russia, United States and also Spain. This is because there are many conflicts which may include things like religion and political disagreements. ...read more.

Types of counter terrorist measures used to combat terrorism Financial measures - There have been many actions taken by the UN, the OCSE and the British Government. Such as; * Consultation with the charitable sector to keep it safe from terrorism. * More data-sharing between the public and private sectors and better pooling of intelligence. * Revised money laundering regulations * Changes to the consent and tipping off rules * Tackling the abuse of money service businesses. Millions of pounds of terrorist funding has been confiscated in Britain, the links between terrorist funding and crime funding in general can make the money a lot easier to find, but there is still legal difficulties in identifying terrorist money and getting access to suspected terrorist accounts. Sanctions -This is the agreed cutting of trade between the UK and to countries which appear to support terrorism. Sanctions can be targeted like trying to put a ban on military equipment or materials that may be developing nuclear power. In the past the UK has carried out sanctions with against Serbia, North Korea, Iran and Iraq. If the things they have stopped trading are things like food and medicine the residents of the country may struggle a lot more and cause hardship. ...read more.

So therefore a number of laws have been created to try and stop this happening. The Asylum and immigration act 1996 made it more difficult for immigrants to get work in Britain and meant employers had to check people's papers before they can employ them. Security of public buildings - Airports, train bus and tube stations, sports grounds, nightclubs and large shopping malls are the building that are most at risk of terrorism, mainly because there large amounts of people in these places at one time. So they have increased security around these buildings, they try and do this by having large evacuation plans, and having staff that are trained in dealing with chemical attacks. Awareness/vigilance campaigns/advertisements - The government tries to encourage people to be more aware/vigilant in security situations, and to report cases where they think there is a chance of a terrorist attack or even if they think there is terrorist training or planning taking place. Build relationships with communities - The police and prison service have extensive diversity and awareness training to try and make them better and able to communicate with ethnic minorities. The police force also have PCSO's to try and make the community feel that there is more of a police presence and to maintain a strong contact with the public. ...read more.