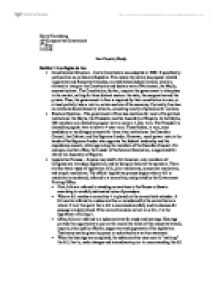 Kerry Nierenberg AP Comparative Government 7th Hour 3-22-09 Iran Country Study Section I: Les Regles de Jeu * Constitutional Structure - Iran's Constitution was adopted in 1980. It specifically outlines Iran as an Islamic Republic. This means the nation has popular elected Legislative and Executive branches, an established Judicial branch, which is allowed to interpret the Constitution and declare acts of Parliament, the Majlis, unconstitutional. The Constitution, further, requires the government to take place in the market, calling for three distinct sectors: the state, the cooperative and the private. Thus, the government in Iran is required by their constitution to own, or at least partially take a role in, certain sectors of the economy. Currently, Iran has an extensive Social Security network, consisting mostly of pensions for workers. * Electoral Systems - The government of Iran has elections for most of its political institutions: the Majlis, the President, and the Assembly of Experts. In the Majlis, 290 members are elected by popular vote to serve a 4-year term. The President is elected by popular vote to serve a 4-year term. These bodies, in turn, elect candidates or verify appointments for three other institutions: the Guardian Council, the Cabinet, and the Supreme Leader. However, much power rests in the hands of the Supreme Leader who appoints the Judicial leadership and the expediency council, while approving the members of the Guardian Council. For example, another office, the Leader of the Islamic Revolution, is appointed for life by the Assembly of Experts. * Legislative Process - Anyone may draft a bill however, only members of Congress can introduce legislation, and by doing so become the sponsors. There are four basic types of legislation: bills, joint resolutions, concurrent resolutions, and simple resolutions. The official legislative process begins when a bill or resolution is numbered, referred to a committee, and printed by the Government Printing Office. * First, bills are referred to standing committees in the House or Senate according to carefully delineated rules of procedure. ...read more.

Views on economic and cultural changes are cross-cutting. Social welfare in Iran, as elsewhere in the Islamic world, has also traditionally been a matter of discussion. The country faces major problems, including a large subculture of drug users (estimated at over two million) and the AIDS infection rate, for which they are mostly responsible. Another pressing issue is Iran's human rights record, which leaves much to be desired. To this day there are numerous and continued human rights violations, including the lack of an independent judiciary, the use of the death penalty, the use of torture in prisons and other detention centers, the use of amputations and other cruel punishments, a continuing campaign against journalists and intellectuals, and a culture of impunity for vigilantes who commit abuses against regime opponents and ordinary citizens who do not conform to strict Islamic codes of conduct. * Informal Power Structures - Many factions of political influence exist in Iran that are not necessarily formal power structures. There are numerous important groups located in the gray zone between the regime and civil society which are critical of the regime. These groups constitute a religious "semi-opposition," criticize the regime on a religious basis, and strive for nonviolent reform of the political system within the boundaries established by the constitution. In addition, there are a number of small, militant opposition groups that actively seek the violent overthrow of the regime. These consist of monarchists, the Islamic Marxist Mojahedin-e Khalq, the separatist Kurdish Democratic Party of Iran, and the several underground groups that speak for Iran's discriminated-against Sunni minority. * Major Political Forces * United Principlist Front - a coalition of 11 conservative lists that is the dominant force in the new Majlis. The front's strong conservative undercurrents and innate dislike for the opposition reformist blocs should ensure its close association with the conservative government. * The Inclusive and Participation Front - a more assertive opposition, comprising of both conservative opponents of the president, and reformist groups. ...read more.

While they must follow in accordance with the Constitution, they must also follow Islamic Sharia law. This highlights a very important part of Iranian civic culture, the role of Islam in the political process. * Methods of Political Mobilization - Political parties, coalitions, organizations, and other factions of the public that pass influence on political issues offer outlets for citizens frustrated or content with the current political system. Since Iran has a multi-party Republic, these political parties can serve as a way to connect the people and the government. * The Impact of Economic Development on the State - Economic growth in Iran will remain stable over a forecast period of the next five years or so. However, the slow pace of oil output growth, and consequent stagnation of oil revenue, will force the government to rein in its expansionary fiscal policy. Real GDP growth is expected to average around 4.4% each year over the forecast period. * Civic Culture - In almost every faction of Iranian government, Islam has a very powerful effect on the practical and theoretical role of government in relation to tradition, history, ethnicity, and religion. The people of Iran have always been proud, favoring conservative and religious traditions over revolutionary concepts. The absence of communists, or any favorable political factions who do not have strong religious roots, illustrates this strongly. From this, it can be determined that the Iranians, much like the British, favor their own cultural traditions and evolutionary government, rather than revolution and foreign intervention. * Methods of Leadership Selection - The Iranian President and Majlis are elected from the populace, while other political entities, such as the Supreme Leader, are elected from the Assembly of Experts who are elected from the people. In addition, some power structures, such as the Guardian Council, are established through religious institutions and clergy. Section VII: Media Review Article 1 - "Pop culture can be bigger bridge between U.S., Iran" http://www.iranian.ws/iran_news/publish/article_29052.shtml This article refers to the assumption that the news forecasts that Iranians live a very repressive lifestyle. Article 2 - "Why Iran Wants Russia in OPEC" http://www.realclearworld.com/articles/2009/03/why_iran_wants_russia_in_opec.html ...read more.