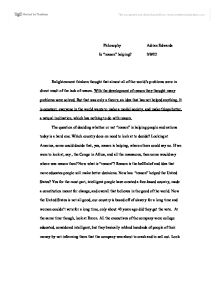 Philosophy Adrian Edwards Is "reason" helping? 3/9/02 Enlightenment thinkers thought that almost all of the world's problems were in direct result of the lack of reason. With the development of reason they thought many problems were solved. But that was only a theory, an idea that has not helped anything. It is constant, everyone in the world wants to make a model society, and make things better, a natural inclination, which has nothing to do with reason. The question of deciding whether or not "reason" is helping people and nations today is a hard one. Which country does on need to look at to decide? Looking at America, some could decide that, yes, reason is helping, where others could say no. If we were to look at, say , the Congo in Africa, and all the massacres, then some would say where was reason then? ...read more.

Look at Gary Winnick, who was a competent man who helps create a hoax of a company that folded in over night. So for the most part one can conclude that "reason" does not help at all, its just another idea like God, which cant be proven or disputed, I mean what's the point of arguing over something unable to be proven? Is change part of the "reason" theory? No because the "reason" theory? NO because with time comes more issues. All of which have to be dealt with in time. For a second country, look at Russia. With a huge population of 148 million, and the average income of two thousand dollars a year, some would say that its not a successful country. ...read more.

"Reason" was just another idea to help the expansion of people's minds. IT was used to open people's minds to an idea that there are better ways to do things and being educated was absolutely a plus. The idea is a good one in that it is true that a reasonable person, if in a tight situation, will tend to think for the best of their friends and family around them, but at the same time as other things, its not always true. So for the most part, "reason" is another idea, such as the "cookie cutter" idea, where for every thing we see there is a perfect version somewhere else and that "else" is heaven so to speak, which some say yes and others say no. So really its but to what one is willing to apply to the world and believe. ...read more.