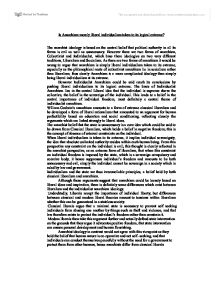 Is Anarchism merely liberal individualism taken to its logical extreme?

From this perspective any constraint on the individual is evil; this thought is clearly reflected in the anarchist perspective, as an extreme form of liberalism, that when this constraint on individual freedom is imposed by the state, which is a sovereign compulsory and coercive body, it hence suppresses individual's freedom and amounts to be both unnecessary and evil, simply the individual cannot be sovereign in a society which is ruled by law and government. Individualism and the state are thus irreconcilable principles, a belief held by both classical liberalism and anarchism. Although these arguments suggest that anarchism could be loosely based on liberal ideas and inspiration, there is definitely some differences which exist between liberalism and the individualist anarchism ideology. Undoubtedly, Liberals accept the importance of individual liberty; but differences between classical and modern liberal theories amount to tensions within liberalism whether this can be guaranteed in a stateless society. ...read more.

Another liberal belief which contrasts with anarchist ideas is that government power can be controlled by the development of constitutional and representative institutions. These are believed to protect the individual by creating checks and balances limiting the power that governments have, and to ensure that they are also held accountable to the public. Anarchists dismiss this idea however and regard constitutionalism and democracy as facades behind which political oppression operates, and that all laws infringe individual liberty, no matter what type of government enforces them, with the belief that all states are an infringement on individual liberty. Anarchism is quite a complex ideology which draws aspects from two pretty different ideological traditions, liberalism and socialism, so it would be wrong to say that anarchism is merely liberal individualism taken to its extreme, as there are tensions between the ideology itself which would suggest anarchism is more simply a combination of different theories within liberalism and not merely just COLLECTIVISM ...read more.