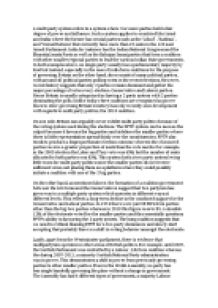 Is Britain a Multi Party System?

﻿A multi party system refers to a system where 3 or more parties hold a fair degree of power and influence. Such a system applies to countried like Israel and India where the former has crucial parties such as the ?Likud? , ?Kadima? , and ?Yisrael Beitenu? that currently have more than 15 seats in the 120 seat Israeli Parliament. India for instance has the Indian National Congress and the Bharatia Janata Party as well as the Bahujan Samaj parties that form a coalition with other smaller regional parties to lead the various Indian State governments. In both examples above, no single party usually has a parliamentary majority by itsel but instead, especially in the case of India form coalitions for the purpose of governing. ...read more.

FPTP also tends to produce a disproportionate election outcome wherein the 2 favoured parties receive a greater proportion of seats than the vote merits. For example, in the 2005 election the Labor and Tory vote was 65% but the number of seats allocated to both parties was 82%. This system fuels a two party system leving little room for multi party politics since the smaller parties do not receive sufficient votes; not placing them on a platform where they could possibly initiate a coalition with one of the 2 big parties. On the other hand, as mentioned above, the formation of a coalition government between the Lib Dems and the Conservatives suggest that two partyism has given way to a multiple party system which operates in different ways at different levels. ...read more.

For example, until 2007, the Scottish Parliament was controlled by a Labour , Lib Dem coalition whereas the during 2007-2011, a minority Scottish National Party administration was in power. This demonstrates a shift in power from previously governing parties to other smaller parties. Even in the Welsh Assembly, no party has ben single handedly governing the place without a change in government. The Assembly has had 4 different types of government, a majority Labour Administration, Labour-Liberal Democrat coalition and another one between Plaid Cymru and Labour. This supports the idea that no single party enjoys the adequate parliamentary strength needed to have a realistic prospect of winning government power alone. In such cases, multi party politics has emerged in Britain which implies that the distinction between major and minor parties are irrelevant. ...read more.