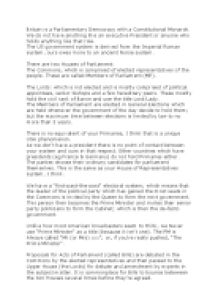 Is Britain a real democracy? How does the British system compare to the US?

﻿Britain is a Parliamentary Democracy with a Constitutional Monarch. We do not have anything like an executive President or anyone who holds anything like that role. The US government system is derived from the Imperial Roman system, ours owes more to an ancient Norse system. There are two Houses of Parliament: The Commons, which is comprised of elected representatives of the people. These are called Members of Parliament (MP). The Lords: which is not elected and is mostly comprised of political appointees, senior bishops and a few hereditary peers. These mostly hold the civil rank of Baron and use the title Lord/Lady. The Members of Parliament are elected in General Elections which are held whenever the government of the day decide to hold them; but the maximum time between elections is limited by law to no more than 5 years. ...read more.

This person then becomes the Prime Minister and invites their senior party politicians to form the Cabinet; which is then the de-facto government. Unlike how most American broadcasters seem to think, we Never use "Prime Minister" as a title (because it isn't one). The PM is Always called "Mr (or Mrs) x*x"; or, if you're really pushed, "The Prime Minister". Proposals for Acts of Parliament (called Bills) are debated in the Commons by the elected representatives and then passed to the Upper House (the Lords) for debate and amendment by experts in the subject matter. It is commonplace for Bills to bounce beteween the two Houses several times before they're agreed. When both Houses of Parliament have agreed and passed the Bill it is presented to the Queen. ...read more.

The fact that the EU is an elected dictatorship argues against a true democracy as the people of the UK have non say on the decisions made within the union so it is not democratic. So, the simple answer is: Yes, we are a democracy but in reality it does seem more like an Elected Dictatorship. Generally it seems to work but occasionally the actions of government do leave me wondering what planet they're on sometimes. It's not the same as yours and neither is perfect. We all have corrupt and incompetent politicians and we also have brilliant statesmen; but we can each get rid of the bad ones periodically so that's democracy at work. However compared to other countries we have a wealth and freedom of speech and action that most of the nations of this world could only dream of. ...read more.