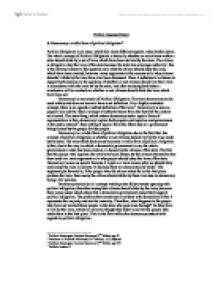 Is Democracy a viable form of political obligation?

Politics Assessed Essay Is Democracy a viable form of political obligation? Political Obligation is an issue, which has many different aspects, when broken down. The whole concept of Political Obligation is basically whether or not citizens within a state should abide by a set of laws, which have been derived by the state. The citizen is obliged to obey the laws of the state because the state has sovereign authority1; this is the obvious answer to the question as to why the citizen should obey the laws, which have been created, however many arguments to the reasons as to why citizens shouldn't abide by the laws have also been discussed. There is substancial evidence to support both answers to the question of whether or not citizens should live their lives in accordance with the laws set by the state, and after analysing both sides a conclusion will be reached on whether or not citizens should abide the laws which have been set. Democracy is one source of Political Obligation. The term democracy can be used widely and does not seem to have a set definition. It is a highly contested concept; there is no agreed or settled definition of the term2. Democracy is seen as popular rule and the whole concept of authority stems from the fact that the leaders are elected. The main thing, which makes democracy such a special form of representation is that, democracy implies both popular participation and government in the public interest3, thus making it special from the others due to a government being elected by the people for the people. ...read more.

The purpose of the Social contract argument, however, is to highlight the value of the sovereign state to the individual...and Hobbes wished individuals to behave as if the historical fiction was true, by respecting and obeying government and law, in gratitude for the safety and security that only a sovereign state can provide6. The fact that fiction is mentioned in the last sentence suggests that Hobbes maybe realised that in reality this may not work, however it is evident that if the theory was actually in practice then political obligation would be achieved as, each individual would have to give a piece of liberty in order to set up a law to help them live life in a secure manner. Therefore the reason why they would have to obey the laws of the state would be due to the fact that if they didn't, security would not occur for each individual and also, the liberty which they would have sacrificed would have been for nothing, and the individuals themselves would realise that. Another reason why political obligation should occur within a state is due to the citizen's natural rights. Although the whole concept of democracy believes in rights being protected, John Locke (17th Century English Writer) suggests that if a state, such as a democratic one, was to deprive its citizens of certain rights, then those citizens were not obliged to listen to them. ...read more.

The existence of permanent minorities, whose aspirations, wishes and even principles are systematically ignored or overridden in the collective decision making process, can easily make a majoritarian democracy unworkable9. This is the flaw in the democratic system that was mentioned earlier. If there is a minority in a society, then working in a democratic system can prove to be very difficult. Therefore the problem with minorities is that although they may not believe in something or, don't agree with something, they will always be classed as the minority, and will generally have to go along with whatever is going on in the general society that they live in. Overall, to the question of whether or not democracy is a viable form of political obligation, the conclusion, which has been reached, is that, although there is sufficient evidence to suggest that political obligation is the right thing to do in order to have a stable society, the fact that there are flaws in theorists work such as Rousseau's and Locke's, shows us that political obligation may be the right thing to do but it still isn't as organised and as straight forward as the theorists make out. 1 Political Ideologies; Andrew Heywood 2nd Edition pg 42 2 Problems of Political Philosophy 2nd Edition; D.D.Raphael 3 Political Ideologies; Andrew Heywood 2nd Edition pg 329 4 Politics Lecture 3 5 Political Theory; Andrew Heywood, pg 124 6 Political Ideologies; Andrew Heywood, pg 39 7 Problems of Political Philosophy; D.D.Raphael, pg 190 8 Politics Lecture 3 9 Democracy; Anthony Arblaster, pg 70 ...read more.