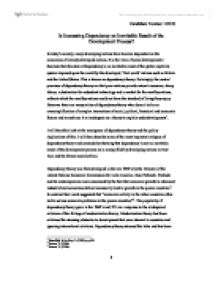 Is Increasing Dependency an Inevitable Result of the Development Process?

Is Increasing Dependency an Inevitable Result of the Development Process? In today's society, many developing nations have become dependent on the economies of already developed nations. It is the view of some developmental theorists that this state of dependency is an inevitable result of the global capitalist system imposed upon the world by the developed, 'first world' nations such as Britain and the United States. This is known as dependency theory. Put simply, the central premises of dependency theory are that poor nations provide natural resources, cheap labour, a destination for redundant technology and a market for the wealthy nations, without which the wealthy nations could not have the standard of living they enjoy. However there are many critics of dependency theory who deem it to be an oversimplification of complex interactions of social, political, historical and economic factors and as such see it as inadequate as a theory to explain underdevelopment1. I will therefore look at the emergence of dependency theory and the policy implications of this. I will then describe some of the most important critiques of dependency theory and conclude by showing that dependency is not an inevitable result of the development process as is exemplified by developing nations in East Asia and the former socialist bloc. ...read more.

Dependency theory repudiates the neo-classical model of economic growth which assumes that the market will allocate the rewards of efficient production in an unbiased manner. This assumption may be valid for a well integrated economy where consumption patterns are not distorted by non economic forces such as racial, ethnic or gender bias. It is not valid for developing economies. For these structural reasons, dependency theorists argue that the market alone is not a sufficient distributive mechanism. There is also greater concern within the dependency framework about whether economic activity is actually benefiting the nation as a whole. So dependency theorists emphasise social factors (such as life expectancy, literacy and infant mortality etc) more than economic ones. Dependent states should therefore seek to follow strategies of self reliance. This is not to endorse a policy of autarky, but rather a policy which endorses controlled interactions with the world economy.11 Dependency theorists make a clear distinction between underdevelopment and undevelopment. Undevelopment "refers to a condition in which resources are not being used, for example European colonists viewed the North American continent as an undeveloped area: the land was not actively cultivated on a scale consistent with its potential"12. Whereas "underdevelopment refers to a situation in which resources are being actively used, but used in a way which benefits dominant states and not the poorer states in which the resources are found"13. ...read more.

There are also independent economies such as Japan which has managed to avoid dependency. It is interesting to compare for example Japan and Java which were both agrarian societies in the late 19th century more or less at the same stage of development. Japan through adopting policies of exclusion and isolation from the global capitalist system managed to develop without ever becoming dependent. Java on the other hand was colonised by the Dutch and never effected the transition21. Dos Santos refers to this where he maintains it is possible to overcome economic dependence if "dependent economies can obtain a high degree of productive autonomy and develop an important sector [of machines and industrialized raw materials]"22. In conclusion if we look at the example of socialist countries such as China and Cuba we see that developed nations need not play a part in the development of another country. It is possible to develop a strong economy as in the case of Japan by practicing policies of regulation, exclusion and isolation. However the colonial legacy is such that former colonies have a much more difficult task in developing and maintaining their autonomy. It is also possible to escape dependency by subscribing to another political system outside capitalism such as was the case with socialist states. However, "whatever the deficiencies of dependency theory, the dependency of the Third World is certainly a reality and one which has much to answer for its predicament"23. ...read more.