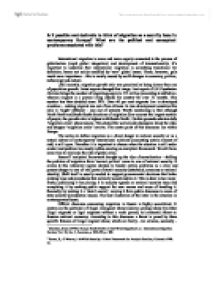 Is it possible and desirable to think of migration as a security issue in contemporary Europe? What are the political and conceptual problems associated with this?

Is it possible and desirable to think of migration as a security issue in contemporary Europe? What are the political and conceptual problems associated with this? International migration is more and more eagerly connected to the process of globalisation (rapid global integration) and development of transnationality. It's important to underline that international migration is something transitional by definition, hence not solely modified by 'new' global issues. Those, however, gain much more importance - this is mostly caused by swift changes in economy, politics, technology and culture. Until recently, migration growth ratio was perceived as being slower than one of population growth. Latest reports changed this image. Last report of UN Population Division brings the number of migrating people to 175 million (according to definition whereas migrant is a person living outside his country for over 12 months. This number has then doubled since 1975. Over 60 per cent migrants live in developed countries - making migrant one out of ten citizens. In less development countries this ratio is 'slight' different - one out of seventy. Worth mentioning is that although North-North and South-South directions of migration flow account the largest number of people, the growth ratio is highest with South-North1. On this grounds scholars defy 'migration crisis' phenomenon. This started the world-wide discussion about the risks and dangers 'migration crisis' involve. The centre point of this discourse lies within Europe. The notion to define migration as a direct danger to national security or as a natural advent of contemporary international relations (accounting certain amount of risk) ...read more.

Finally, with the destruction of the iron curtain new immigrants flows from Eastern Europe arrived in Western Europe. This direction of migration flow is yet somewhat different. At least its perception by migration-targeted states is different. Due of their cultural and historical ties to Europe, East Europe migrants gained Advantages over immigrants coming from Mediterranean (being - actually - THE main migration source5 for Western Europe). The 1999 Eurobarometer opinion poll question: "Are the benefits form the presence of immigrants from non-European Union countries?" brought quite interesting results. 40 per cent answered YES and 48% said their country would be "better off" without their presence. This shows the hardship of policy makers trying to carry out migration policies: an important number of the public opinion is not in favour of an integration policy. The 1957 Treaty of Rome, which established European Economic Community (EEC), laid down freedom of movement of workers (along with free movement of capital, goods and services). However, this only referred to workers moving between the original six member states. The much larger flows from outside the EEC were seen as a matter for national regulation. The unplanned settlement and emergence of multicultural societies in EU countries led to differing national responses. Mid 1980's common migration and integration policy cooperation was non existent. Schengen Agreement (1985) gave birth to freedom of movement zone (within fixed borders of states). But Schengen was not a part of the European Community framework, and initially included only France, Germany and the Benelux. Efforts and cooperation within EC developed in late 1980's, and were given addend impetus by the Maastricht Treaty offer. ...read more.

The government report on Finnish Security and Defence Policy 200110 says: The effects of globalization are mainly positive, but there are also problems. Globalization provides a chance to strengthen overall security, and as the interdependence of nations, economies and societies increases, it becomes easier to jointly resolve security problems. Multiculturality is, therefore, a risk not a danger. The same goes for migration: the globalisation is a good thing, the official Finnish policy document insists, but there are risks in it - migration being one example. The distinction between risk and danger11 is important one. Dangers are objective issues independent from the subject threatened by them. They are often conceived as external to the subject. Risks, in contrast, are issues that at least partially are products of actor's doing and choices. Thus they are not external to subjects, but internal. * * * From the basis of danger / risk distinction it can be reasoned that the moral necessity to dismantle the dangers, whereas risks have to be managed and lived with. Then my answer to paper's opening question, whether migration can be perceived as a security problem and whether it is desirable, consists of two points: 1) Migration is handled as a state security issue, sometimes in terms of a danger (Russia), sometimes in terms of a risk (Finland) 2) It is desirable to discuss migration rather as an internal policy issue, than as a question of external security. I personally believe that only possible solution for a long - term coexistence between native and immigrant citizens of Europe is a multicultural European society. ...read more.