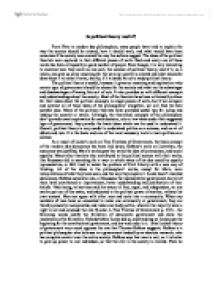 Is political theory useful? From Plato to modern day philosophers, many people have tried to explain the way the society should be created, how it should work, and what would have been outcomes if the society was created the way the authors suggest. The ideas of the political theorists were captured in their different pieces of work. Each and every one of these works has been critiqued by a good number of people. Even though, it is very interesting to examine how they work as one unit, the science of political theory, and if it, as a whole, can give us some reasoning for the way our society is created and what should be done about it to make it better, shortly, if it is useful for us to study political theory. The political theory is useful, because it gives us reasoning and explanation why certain type of government should be chosen for the society and what are the advantages and disadvantages of having this sort of rule. It also provides us with different concepts and understandings about the society. Most of the theorists have been criticized by others for their ideas about the political concepts in single pieces of work, ...read more.

Each philosopher suggests his own way of seeing society. A society that Hobbes brings forward is different than that of Locke, or Marx. In Hobbes's society men are evil, and because they are evil their society should be formed under a rule of autocrat. Locke believes that the people are wise, and they give up their right for good to a representative ruler. Marx on the other hand suggests that all men are equal, and because they are so, their representative should be among them. It seems like they all are different from each other, and for sure the follower of any of those political theories would argue, and give reasoning why he thinks that his beliefs are true. So there is no common ground, but the beauty of the political theory is that it provides us with understanding of political society as a whole. The USA is democracy, Bahrain is autocracy, and China is communist. Of course, none of them is exactly the way the theorists suggest, but there are very few differences. So the political concepts that the political theorists suggests are useful for the political scientists to understand the formation of the society, why it has done so, and the mechanisms that make it function. ...read more.

Politics without political theory is like a car without an engine. Political theory is useful, because it is the sole of politics. As of work of political theorists, we can know the differences between democracy, communism, and autocracy, and what are the obligations and rights of the governor and the people who are governed by him in each political system. It also provides us with the range of societies, and gives us the chance to be able to choose the one that we like most. The criticisms about each and every one of the theories and their theorists is to be able to differentiate the authors, and find the strength and weaknesses of each one. Political theory gives the necessary information for the governor to know, to be able to governor successfully by making his people happy. It is true that there is no explanation for every case of decision-taking or law-making, but from reading the works of the authors we can know whether the taken decision was right or wrong for that society. Each philosopher could be criticized for his ideas and beliefs, but political theory as mechanism that studies political behavior should thought as one unit, and together it makes sense with the examination of those behaviors. Political theory is useful and necessary for any studies related to politics. ...read more.