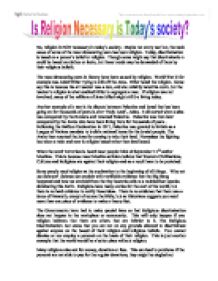 Is Religion Necessary is Today's society?

No, religion in NOT necessary in today's society. Maybe not every war but, the main cause of some of the most devastating wars has been religion. Today, discrimination is based on a person's belief or religion. Though some might say that discrimination could be based on clothes or looks, but those trends may be demanded of them by their religious beliefs. The most devastating wars in history have been caused by religion. World War II for example was Adolf Hitler trying to kill off the Jews. Hitler hated the religion. Some say this is because his art teacher was a Jew, and she unfairly hated his work, but the teacher's religion is what enabled Hitler to segregate a race. ...read more.

This is because most Muslim activists believe that Western Civilizations, Cultures and Religions are against their religion and as a result have to be punished. Some people need religion as the explanation to the beginning of all things. Why not use Science? Science can explain with verifiable evidence that the Big Bang happened and how we evolved from the tiny bacteria cells to a multicelluar species dominating this Earth. Religions have many stories for the start of the world, but there is no hard evidence to verify those ideas. There is no evidence that there was a Jesus of Nazareth, except of course the Bible, but as Historians suggests you need more than one piece of evidence to make a theory fact. ...read more.

What happens if you don't earn a lot and you give 10% of it away and don't have enough to pay for the weekly groceries? The conclusion is to this essay that today's society is better off without religion. This assumption is based on that if we did not have religion many of the fights and arguments that are going on in today's world would not exist. Many people feel safe not having a religion, since it means that they could not be discriminated against because of their religion or be in the middle of a war were people want to execute every member of their religion. The finale reason is that there are many new religions and cults that are just in it for the money revenue and that prey on the feeble minded. That brainwash people into thinking that if they donate their money, they will have eternal life after death. Religion is not necessary. ...read more.