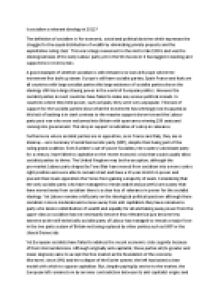 Is socialism a relevant ideology in 2012?

﻿Is socialism a relevant ideology in 2012? The definition of socialism is ?An economic, social and political doctrine which expresses the struggle for the equal distribution of wealth by eliminating private property and the exploitative ruling class?. This was a large movement in the mid to late 1900s and was the ideological basis of the early Labour party yet in the 90s however it has lagged in backing and supporters in recent years. A good example of whether socialism is still relevant is to look at Europe where the movement first built up steam. Europe's still have socialist parties, Spain France and Italy are all countries with large socialist parties this large existence of socialist parties shows the ideology still has a large staying power in the world of European politics. However the socialist parties in most countries have failed to make any serious political inroads. In countries where they held power, such as Spain, they were very unpopular. This lack of support for the socialist parties shows that the movement has seemingly lost its appeal as this lack of backing is in stark contrast to the massive support shown toward the Labour party post war who were welcomed into Britain with open arms winning 239 seats and coming into government. ...read more.

Although originally anti-capitalist, these parties all (to greater and lesser degrees) came to accept the free market as the foundation of the economy. Moreover, since 1991 and the collapse of the Soviet system, the left has lacked a clear model with which to oppose capitalism. But, despite paying lip service to the market, the European left remains torn by an inner contradiction between its anti-capitalist origins and its recent conversion to free-market economics such as the New Labour shift spearheaded by Tony Blair. This lack of ideological direction has left the socialist movement without purpose and real coherency this means socialism is left less like an ideology and more a pile of unformed ideas, this means it has lost support and relevance Consequently, a struggle for power has erupted. In France and Germany, a new far left ? composed of Trotskyites, communists, and anarchists ? is rising from the ashes to become a political force again. These rejuvenated leftist take the form of Oskar Lafontaine's Left party in Germany, as well as various revolutionary movements in France; one of them has just named itself the Anti-Capitalist party. ...read more.

This extremely limits socialism and the fact that so much of Europe have become so heavily involved and invested in the EU there is little chance of socialism prospering in Europe. Conversely the core philosophy of socialism is more relevant today than it has been in years with the massive economic crashes of places like Greece and the feelings of revolution in the Middle East. More than ever it seems Socialism and Communism will return, as the conditions are extremely similar to the world state during the large socialist movement post the Second World War. This shows that the relevance and opportunity for traditional socialism is optimum. The ideological weakness and division of the left will not, of course, exclude them from power. Leaders can cling to office, as José Zapatero did in Spain and Gordon Brown did in the UK. The left may ultimately win general elections elsewhere if the new Keynesian right proves unable to end the crisis. But whether in opposition or in power, the socialists have no distinct agenda. In essence traditional socialism holds no relevance in today’s society as the relevance of class has dropped bring socialism with it. However more moderate socialism such as the New Labour ideology can remain relevant. ...read more.