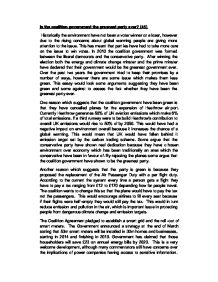 Is the coalition government the greenest party ever?

Is the coalition government the greenest party ever? (45) Historically the environment have not been a voter winner or a loser, however due to the rising concerns about global warming people are giving more attention to the issue. This has meant that parties have had to take more care on the issue to win votes. In 2010 the coalition government was formed between the liberal democrats and the conservative party. After winning the election both the energy and climate change minster and the prime minster have declared that their government would be the greenest government ever. Over the past two years the government tried to keep their promises by a number of ways, however there are some issue which makes them less green. This essay would look some arguments suggesting they have been green and some against to assess the fact whether they have been the greenest party ever. One reason which suggests that the coalition government have been green is that they have cancelled planes for the expansion of Heathrow airport. ...read more.

The Government announced a strategy at the end of March stating that 53m smart meters will be installed in 30m homes and businesses, starting in 2014 and finishing in 2019. Government has claimed that those householders will save �23 on annual energy bills by 2020. This is a very welcome development, although many commentators still have concerns over the implications of power companies having access to sensitive information. There are also concerns about fairness with those able to understand energy use and purchase efficient appliances standing to benefit more. However there are some arguments against the fact that the coalition government is the greenest party ever. One of key issue is that the government have tried to privatise forests. Forests have many environmental values. They are important for wildlife because it is the home for many species and also help to slow global warming. This is because trees take carbon dioxide from the air and storing it as carbon in their wood. ...read more.

They have also argued that a ban on fox hunting can reduce employment rate in the urban areas and given the economic state of the country it would not be a popular choice. In conclusion the government have been green but the issue of whether they have been the greenest government ever is not clear. The government have been green in the fact that they have in less than 2 year scrapped plans for a third runway at Heathrow, It also plans to introduce a new high speed rail network that will be much less polluting than alternative forms of transport, launched Green Deal to improve home energy conservation etc. However they have also scrapped the loan to Sheffield Forgemasters, and stopped Labour's plan for the Green Investment Bank. But despite all those the government have been green because in many issue they have shown their commitment to being the greenest government ever by choosing the environment over the economy despite the fact that the country is in recession. ...read more.