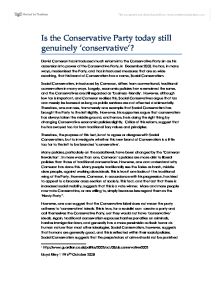 This is true, for a socialist can create a party and call themselves the Conservative Party, yet they would not have 'conservative' ideals. Again, traditional conservatism espouses harsher penalties on criminals, harsher immigration laws, and generally has a more pessimistic outlook towards human nature than most other ideologies. Social Conservatism, however, suggests that humans are generally good, and this is reflected within their social policies. Social Conservatism suggests that the perpetrators of crime should not be punished as severely as traditional conservative values would suggest, but should be rehabilitated and there should be a greater understanding of why people commit crime. This is a liberal view, if any, and since liberalism takes a positive view of human nature as the norm, one can logically link this back, to Social Conservatism. Essentially, this shift to the left, and this escape from traditional Tory values can be seen in a real world example, the (traditional) Conservative member shift to more right-wing parties, such as the British National Party. ...read more.