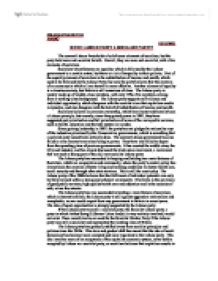 Is the labour party a socialist party.

GRAHAM SAMUELS AMDG 02/11/2001 IS THE LABOUR PARTY A SOCIALIST PARTY? The current Labour Party holds a belief some elements of socialism, but the party hold more anti-socialist beliefs. Overall, they are more anti-socialist, with a few elements of socialism. Socialism's key features are equality, which is followed by the Labour government to a certain extent, but there is a lot of inequality in their policies. Part of the equality element of socialism is the redistribution of income and wealth, which used to be followed by the Labour Party, but now the party believes that the creation of an economy in which all can benefit is more effective. Another element of equality is a classless society, but Britain is still conscious of class. The Labour party is mostly made up of middle-class members, with only 15% of its members coming from a working-class background. The Labour party supports self-reliance and individual opportunity, which disagrees with the socialist view that capitalism results in injustice, and also disagrees with the belief of redistribution of income and wealth. Socialism believes in common ownership, which has always traditionally been a Labour principle, but recently, since they gained power in 1997, they have suggested part privatisation and full privatisation of some of the main public services, such as health, education and the tube system in London. ...read more.

There are increasingly more right-wing Labour politicians, and a smaller number of left-wing politicians then the party has traditionally had. The party is generally shifting to the right, which could be a reason to their recent success. Usually the UK is a nation that usually votes for a Conservative government, and very occasionally for a Labour government, said John Ramsden once, but the reason for Labour's recent success and consecutive landslides could be that they are shifting more to the right and they are adopting some Conservative policies and principles, which are usually the reason behind the success of the Conservative party. The Labour party, although they haven't increased the income tax for the wealthy (a socialist belief), have increased taxation of a number of other things, which have enabled the government to spend more on the welfare system. The party has still got a few connections with the Trade Unions, and is funded in part by the Trade Unions, although the link and connection is much weaker than it previously was. The Labour party has largely supported and held the socialist idea of internationalism by joining the EU and signing the social charter of the EU. ...read more.

The real start to Labour's shift from left to centre, and continuously moving towards the right began with the election of Neil Kinnock as leader in 1983. The Labour party began to recover from the convulsions of the early 1980s which had seen it shift towards the left, and it began to move back towards the centre ground of politics. Kinnock moved the Party towards the Conservative-set agenda, with no more talk of nationalisation or unilateral nuclear disarmament. Labour would become enthusiastic Europeans and adopt a new approach through which capitalism was to be managed. This process gave rise to a division within the party between those who believed in the Kinnock reforms and wished to see further reforms, often referred as the modernisers, and those who wanted only limited reform and the preservation of many traditional ideas, the traditionalists. The Kinnock reforms and policy review did not prove to be enough to win Labour the 1992 General Elections. Tony Blair has kept up Neil Kinnock's ideas to shift further to the right, and it has proved to be a success, after two consecutive landslide victories in general elections, after moving away from some of the elements of socialism. Sources: UK Government & Politics (Williams); Government & Politics (Selby); Politics UK; www.labour.org.uk ...read more.