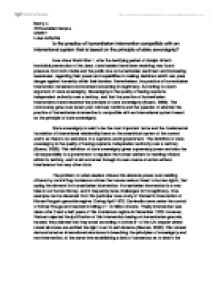 Is the practice of humanitarian intervention compatible with an international system that is based on the principle of state sovereignty?

Despite of breaching Article 2.4 of the UN Charter (Baylis and Smith, 2001), NATO proceeded with their campaign against the critics who argued that doing so means breaking the universally applied laws of state sovereignty and non intervention.The actions of NATO were not condemned by the Security Council, and thus furthermore undermining the international laws preserving state sovereignty as undermining the power of the Security Council. Regarding this controversy, Professor Cedric Thornberry stated "failure to comply with existing rules must inevitably bring about a wider condition of disrespect for the law and, with it, a tendency to anarchy" (Schotle, 2000) President Boris Yeltsin also commented corresponding to this view "an action that is nothing short of undisguised aggression... Only the UN Security Council has the right to decide the use of force should be taken to maintain or restore international peace and security"(Bueno, 2009) On the other hand, supporters of intervention deem NATO's actions were morally justified by arguing that it would be international community's negligence not taking any action to defend the norms of human rights, and that massive violations of human rights are taking place, it is no longer a domestic matter and thus deserve the concern of the international community. ...read more.