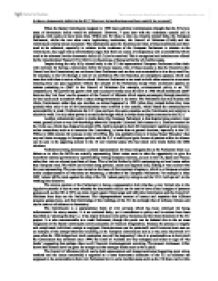 Is there a democratic deficit in the EU? What are its implications and how could it be reversed?

Is there a democratic deficit in the EU? What are its implications and how could it be reversed? When the Santer Commission resigned in 1999 many political commentators thought that the EU's key areas of democratic deficit would be addressed. However, 7 years later with the Andreasen scandal still in progress, little seems to have been done. Within the EU there is only one directly elected body, the European Parliament, whilst the two other main legitimising institutions, the Council of Ministers (CoM) and the Commission (Com) remain unelected. The implications upon the functions and roles of these institutions and their need to be reformed, especially in relation to the weakness of the European Parliament in relation to the Commission, has urged many commentators argue that there are issues of transparency and accountability which need to be reformed for the democratic deficit (D.D.) to be resolved. This is recognised and solutions are offered by the Constitutional Treaty (C.T.) which is in the process of being ratified by all member states. Despite being the only fully elected body in the EU the supranational European Parliament often deals with criticism for having a democratic deficit for many reasons. ...read more.

Also it is questionable as to how much the Commission has reformed since 1999, the Court of Auditors are very unhappy and refuse to sign off 'the books' suggesting that perhaps there is still financial mismanagement occurring. The present Andreasen Affair shows that reforms have not gone far enough and that stronger checks need to be in place. The Council of Ministers (which can be both supranational and intergovernmental depending upon voting methods and the issues concerned) is regarded as a more democratic institution of the EU as ministers are supposed to be accountable to their own Parliament but in some member states such as the UK there can be little control over the their ministers due to the electoral system (in the UK the FPTP system usually returns a strong majority despite voter preferences: in 2005 Labour formed a government with a majority of 67 despite winning 36% of the vote against the Tories 33% and having gained only 22% of the total adult vote). The issue of secrecy and lack of transparency within the Council of Ministers, as with the Commission, is indispensable to the debate of the democratic deficit. ...read more.

D'Estaing's Convention in 2002 looked at the reform of Parliament, i.e. making it more representative, accountable and effective. This is a large issue but also a very important one because the European Parliament is the only directly elected institution. To make the Parliament more effective, the council of ministers could be made directly accountable to the Parliament. Also the Parliament could be given the power to appoint and dismiss individual commissioners. This would most certainly improve the relationship between the branches of EU government and make the institutions more accountable to Parliament and in doing so the EU public. The likelihood of this happening however is remote: the CoM members are drawn from their national governments and such governments are unlikely to want to be more accountable to other member states when it is their own electorate who put them into power. If the Democratic Deficit is not tackled future EU devolvement may be stifled as it could lack citizens' support and fuel the rise of European scepticism. With an increasingly powerful yet unaccountable Commission and future enlargements (Romania, Bulgaria 2007, then perhaps Turkey and Croatia in the future) on the horizon the solutions offered to these problems need to be put into action swiftly if the EU dream is not to crumble. ...read more.