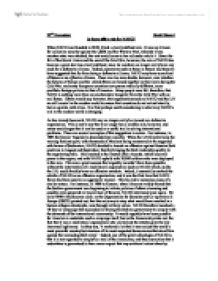 Is there still a role for NATO?

22nd November David Sheard Is there still a role for NATO? When NATO was founded in 1949, it had a clearly defined role. It was an alliance for collective security against the USSR and the Warsaw Pact, whereby if one member state was attacked, the rest would come to her aid under article 5. Since the fall of the Soviet Union and the end of the Cold War, however, the role of NATO has become a great deal less clearly defined, since its members no longer really have any need for a defensive alliance. Indeed, operations such as those in Bosnia and Kosovo have suggested that for from being a defensive alliance, NATO may have some kind of future as an offensive alliance. There are also now doubts, however, over whether the futures of Europe and the United States are bound together as they were during the Cold War, and many European countries now pursue radically different, more pacifistic foreign policies to that of America. Many people now fell, therefore, that NATO is nothing more than an anachronistic hangover from the Cold War with no real future. Others would say, however, that organisations such as NATO and the UN are still crucial in the modern world to ensure that countries do not act unilaterally, but co-operate with allies. ...read more.

recently, in Afghanistan, where they have been helping to keep the peace in Kabul following the overthrow of the Taliban, recently overseeing fair elections in the region. Thus NATO's role as a defensive alliance has become meaningless, but that's not to say that it has no future. It is more accurate to say that NATO is now, as the above examples show, indispensable as an offensive force where required and as a peace keeper, and the fact that it is a multilateral organisations affords it a certain degree of respect that America could never gain. This is not to say that NATO is without its problems, however, and many people have argued that the recent expansion Eastwards at the Prague summit to include the former Warsaw Pact countries Poland, Hungary and the Czech Republic (which was later expanded to also included Bulgaria, Romania, Slovenia, Slovakia and the Baltic states) has not only weakened the alliance, but has meant that far from enforcing world peace, NATO may now in fact totally destabilise the world. Indeed, the fact that the alliance has moved right on to Russia's doorstep, not to mention the fact that three former members of the Soviet Union have joined, has posed a serious threat to Russian interests. ...read more.

Indeed, the EU constitution contains it's own solidarity clause, which, according to the French defence minister, Michelle Alliot-Marie, 'cuts across NATO's own mutual defence clause.' As Ambrose Evans-Pritchard says, the Constitution will '[establish] a mechanism for a vanguard of closely integrated states who wish to press ahead with EU defence on their own, using the EU institutions and assets.' With any common EU security policy bound to conflict with NATO policy, it is argued that the biggest threat to NATO comes from within, and that the fact that it is an alliance of such different interests will mean that it's future survival is highly dubious. As Nicholas Burns, the US Ambassador to NATO, said recently, 'the EU's push for greater military autonomy [poses] the most significant threat to NATO's future.' Thus there is still a role for NATO in the modern world, although this role has shifted from being defensive to being offensive, as above examples have shown. The question now must be, then, whether NATO can function effectively has an organisation in the coming years. Many would say that the polarising effect of America's aggressive foreign policy under George Bush and the recent expansion or the organisation Eastwards towards Russian borders will mean that NATO will cease to have a role in the future, since it is now a body which such conflicting interests. ...read more.