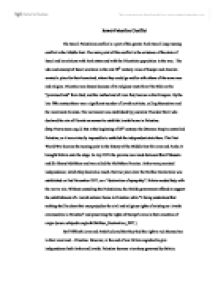 Israel-Palestine Conflict The Israeli-Palestinian conflict is a part of the greater Arab-Israeli long-running conflict in the Middle East. The main point of this conflict is the existence of the state of Israel and its relations with Arab states and with the Palestinian population in the area. The idea and concept of Israel was born in the mid 19th century. Jews of Europe and America wanted a place for their homeland, where they could go and be with others of the same race and religion. Palestine was chosen because of its religious routs from The Bible as the "promised land" from God, and the motherland of Jews fled, known as the Diaspora. By the late 19th century there was a significant number of Jewish activists, calling themselves and the movement Zionists. The movement was established by journalist Theodor Herzl who declared the aim of Zionist movement to establish Jewish home in Palestine. (http://www.teena.org.il) But at the beginning of 20th century, the Ottoman Empire controlled Palestine, so it was virtually impossible to establish the independent state there. The First World War became the turning point in the history of the Middle East for Jews and Arabs. ...read more.

Each state had 50% of the original land, which made the Palestinians very unhappy because 90% of Arab farm land was in the Jewish states and it meant that thousands of Palestinians had to move out to allow the Jews in. But Jewish was very happy, because they at last got what they wanted - a homeland (www.teena.org.il). In 1948, the new State of Israel was proclaimed, and the day after five neighbor Arab countries declared a war to Israel. There was around 40 million Arabs fighting half a million Jews. Amazingly, but Jews won and gained more land as a result. There was the first Arab-Israeli war in 1949; other wars that followed include the Six Day War of 1967, and the Yom Kippur war of 1973. During those wars Israel occupied the West Bank, Gaza strip, Sinai, and Golan Heights in Syria. Israel keeps those lands as pledge for peace talks with Arabs, promising to give it back when Arab countries sing a Peace Treaty with Israel. Also 2 intifadas (in Arabic language term for "uprising") 1987-1991 and 2000-nowadays happened and led to numerous victims among Jewish and Arabs. It is one of the most significant aspects in recent years of the Israeli-Palestinian conflict (http://radar.ngcsu.edu/~jsommers/IPCONFLICT/chronology.html) ...read more.

As it can be seen, the situation is so complicated in the region, and with both sides seeing only its own "truth" it is too hard to say when all this would be over. The death of Yasser Arafat in 2004 became a turning point in the Israel - Palestine conflict. Soon after his death, the alignment of forces in the region cardinally changed. The new government headed by Mahmud Abass seems to be more peace orientated. At last there is a clear vision of two independent states on one land - Israel and Palestine. According to "Road Map", a peace regulating plan signed by both sides through the mediation of US, a cease fire treaty was concluded. Israel has already withdrawn armies from occupied Gaza Strip and continue to liquidate illegal settlements. Palestine for its turn held an elections and struggles with terrorist organizations like Hamas. (www.newsru.com)But there are still so many problems to be solved, most important being the Palestinian refugees and the future of Jerusalem. There is always be tension as long as there are extremists who will not allow a compromises unless it fully suits them, and with all the fear, hatred and suspicion between the two groups it will be very difficult to come to an ongoing peace agreement in the near future. ...read more.