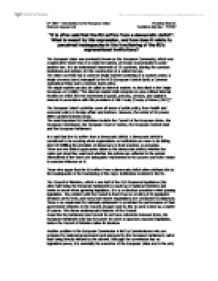 It is often said that the EU suffers from a democratic deficit&quot;.What is meant by this expression, and how does it relate to perceived inadequacies in the functioning of the EU's supranational institutions?

"It is often said that the EU suffers from a democratic deficit". What is meant by this expression, and how does it relate to perceived inadequacies in the functioning of the EU's supranational institutions? The European Union was previously known as the European Community, which was created after World War II to unite the nations of Europe economically to avoid another war. It is an institutional framework of 25 countries, sharing the common institutions and policies, for the construction of a united Europe. The Union currently has a common single market consisting of a customs union; a single currency (euro) managed by the ECB (European Central Bank) a Common Agricultural Policy and a common trade policy. The single market can also be called an internal market. As described in the Single European Act (1986): "The internal market shall comprise an area without internal frontiers in which the free movement of goods, persons, services, and capital is ensured in accordance with this provisions of this Treaty [Treaty of Rome ...read more.

There is no requirment for national parliaments to scrutinise the performance of their government ministers in the Council, though most do this to some extent as a matter of course. This shows undemocratic features of the Council. Areas like the Parliament and Council do not have codecision between them, the European Parliament only has the power to reject or approve proposed legislation, before the Council of Ministers takes its decision. Another problem is the European Commission is led by Commissioners who are proposed by national governments and approved by the European Parliament, rather than being directly elected by the citizens. Although the commission has no legislative power, it is esentially the executive of the European Union and is the only body powered to draft a legislative proposal. Many people have argued the commissioners wield more power than is justified by their limited democratic mandate. Sometimes when politicans have failed in their own country, they have been pensioned off to the commission, and they have little control over the thousands of bureaucrats who are regarded as strong dictators. ...read more.

The rest would be up to the political parties. This would create a simple structure that everyone could follow. Democratic deficit may exist due to a lack of transperancy and an excess of delegation in the legislative process as I outlined above. A solution to the democratic deficit consists of giving more power to the European Parliament as it is the only elected institution. There was a new constituional treaty propsed in order to reduce the democratic deficit. However this treaty failed after a rejection of the draft first by the French and days after the Dutch voters in 2005. It was rejected mostly because there was no change to the principle of EU laws and that the European Commission would remian the sole initiator of legislative proposals. I conclude that EU policies are not fundamentally undemocratic, but that the way the process itself is conducted may give rise to a democratic deficit. Furthermore, I would argue that the EU is able to pursue its policies in spite of a lack of democratic accountability in the legislative process, precisely because the policies themselves are not undemocratic. ...read more.