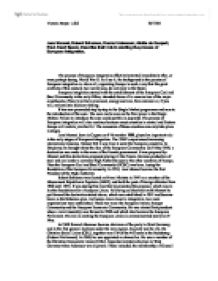 As Europe came closer to integration, two more organisations were established. These two were the European Atomic Energy Community and the European Economic Community. He was elected first president when a Joint Assembly was formed in 1958 and which later became the European Parliament. His role in creating the European Union is commemorated yearly on 9 May. In 1949 Konrad Adenauer became chairman of the party in West Germany; and in the first general elections under the new regime, his party and its ally, the Christian Social Union (CSU), together won 139 of the 402 seats in the Bundestag (Federal Parliament). In 1949, he was appointed as chancellor. He was a member of the Christian Democratic Union (CDU). Important events took place in West Germany when Adenauer was in power. These included, the membership of Council of Europe, founder member of the ECSC, after the failure of EDC, West Germany was recognised as a sovereign state and was admitted to the NATO. Finally, in 1957, Germany was one of the founder members of the EEC. Alcide de Gasperi was Prime Minister of Italy from 1945- 1953. ...read more.

Without each one of these individual inputs the system may not be where it is today! The process of European integration will also continue because many countries in central and eastern Europe will wish to join the EU. The accession of these countries can only take place in stages. The introduction of the euro is the last stage, which must not be forced. First, these countries must integrate their economies solidly into the EU. Then participation in the new exchange rate mechanism can follow. Ultimately, the euro can be introduced. The prospective entrants will have to meet the same requirements as the countries which will introduce the euro at the start of next year. That will take considerable time - time which must also be used to consider any changes in the working methods of the ESCB if that is to consist of between 20 and 30 national central banks. There are issues here which may be even more difficult than the decision that concerned which countries would participate on the first of January 1999. European integration must be judged fairly. We must be aware of friction among state members and failures that occur sometimes. However its participants have already seen peace for 50 years and much has been achieved in this economic field. Victoria Basye- J.S.S 10/11/03 ...read more.