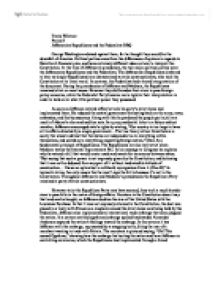 Jeffersonian Republicans and the Federalists DBQ.

Travis Whitmer Period 5 Jeffersonian Republicans and the Federalists DBQ George Washington advised against them, for he thought they would be the downfall of America. Political parties arose from the differences of opinion in regards to Hamilton's financial plan, and have extremely different ideas on how to interpret the Constitution. At the time of Jefferson's presidency, the two major political parties were the Jeffersonian Republicans and the Federalists. The Jeffersonian Republicans (referred to later as simply Republicans) are characterized as strict constructionists, who took the Constitution at its literal word. In contrast, the Federalists had a broad interpretation of the document. During the presidencies of Jefferson and Madison, the Republicans remained strict on most issues. However they did broaden their view to pass foreign policy concerns, while the Federalist Party became more rigid in their interpretation in order to hold on to what little political power they possessed. As soon as Jefferson entered office he took his party's strict views and implemented them. He reduced the central government by cutting back on the army, navy, embassies, and the bureaucracy. ...read more.

Throughout Jefferson's and Madison's presidencies the Republican Party remained a party of strict constructionists. However strict the Republican Party may have seemed, they took a much broader view to pass bills in the realm of foreign affairs. Nowhere in the Constitution does it say that land can be bought; so Jefferson doubles the size of the United States with the Louisiana Purchase. In that it was not expressly allowed in the Constitution, the deal was placed in a treaty with France as a loophole around the strict views now being held by the Federalists. Jefferson also implemented an international trade embargo that soon plagued the nation. In a cartoon entitled ograbme (embargo spelled backwards) Alexander Anderson captured the nation's feelings toward the embargo. In the cartoon it has Jefferson with the embargo, represented by a snapping turtle, biting the rear of a merchant wanting to trade with Britain. The merchant is pictured saying, "Oh! This cursed Ograbme," showing how the embargo his hurting the nation and how Jefferson is controlling commerce, which the Republicans had implemented through a broad interpretation of the Constitution (Doc C). ...read more.

(Doc D)" A group of Federalists came together at Hartford (known as the Harford Convention) to discuss many of the bills being passed by the Republicans and ideas of secession. Here they discussed the issues of the embargo, state admittance, and international commerce. "Congress shall not have the power to lay any embargo on the ships of vessels of the citizens (Doc E)." While the Republicans passed many broad bills, the Federalists became strict constructionists to try to block the Republicans. During the times of Jefferson and Madison, the two parties show a great deal of irony with their political ideals. The Jeffersonian Republicans, usually characterized by taking the Constitution literally, adopted many broad ideas held by Federalists. At the same time, the Federalists let go of their broad interpretation to take up the principals of strict constructionists. In the areas of foreign affairs, land purchases, and commerce, the Republicans loosened their views, while on these very same issues, to oppose the growing party's power the Federalists took up the strict policies previously held by the Republicans. Overall, the Republicans remained moderately strict, but taking on broad ideals to pass certain bills, while the Federalists became stringent to fight against the changing Republican views. ...read more.