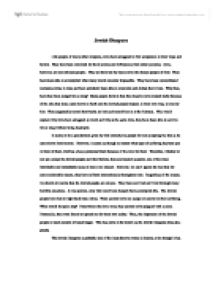 Jewish Diaspora Like people of many other religions, Jews have struggled to find acceptance in their ways and beliefs. They have been criticized for their actions and differences from other societies. Jews, however, are not ordinary people. They are believed by many to be the chosen people of God. They have been able to accomplish what many would consider impossible. They have been outnumbered numerous times in wars and have somehow been able to overcome and defeat their rivals. Why then, have they been judged for so long? Many people believe that they deserve to be treated badly because of the idea that Jesus came down to Earth and the Jewish people helped, in their own way, to crucify him. They supposedly turned their backs on him and turned him in to the Romans. This would explain why Jews have struggled so much and why at the same time, they have been able to survive for so long without being destroyed. It seems to be a punishment given by God towards his people for not accepting his Son as he came down from heaven. However, it seems as though no matter what type of suffering has been put in front of them, God has always protected them because of his love for them. Therefore, whether or not you accept the Jewish people and their beliefs, they are beyond question, one of the most formidable and remarkable races to have ever existed. ...read more.

This translation, known as the Septuagennt, ended up been the basis for the Christian edition of the New Testament. Next, in 4 BC, the Romans took over Israel and the Jews moved away to get away from the Roman corruption and extortion. As you can see, the Jews were being moved from place to place and every time, they were been dispersed even more. As a result, by 350 AD, over ninety-five percent of the Jewish population lived outside of Israel. As time passed, Jewish people continued to be dispersed, settling in several Muslim communities in the Middle East and the Mediterranean around 675 AD. The Muslims embraced the Jews and encouraged them to settle into their centers. Some say this happened because the Muslims wanted to rule their lands, but didn't want to work. Therefore, they invited the Jews, who were very well-educated, and sat back while the Jewish people administered the government and were the "accountants" of the land. In 900 AD, European rulers invited the Jews to become part of their governments as members of the noble class. This further dispersed the Jewish people. Soon, Jews became more and more willing to move from their homeland to help economies in need. The world soon realized how great these people could be. The Jews' ability to develop and build cities was quickly recognized. ...read more.

Another example of the Jews' influence is the number of Nobel Prize winners that come from Jewish descent. Being awarded with a Nobel Prize is one of the greatest honors someone can attain. From 1901 to 1995, there have been one hundred and forty Jewish descendants to have received this award from a total of six hundred and sixty-three possible prizes. That would be a total of over twenty-one percent! Thus, the Jewish people have rendered a great service to mankind. Jewish power is a force that is hard to comprehend. However, it is something that touches the lives of every person in one way or another, whether they like it or not. It is a driving energy that has been felt around the world and it is impossible to resist wondering who the Jewish people really are and how the Jewish Diaspora has changed and will continue to change the world. It changed the world and has up to this point, amazed us. Some might say that the Jewish Diaspora was a terrible thing, but if you analyze and examine its history and outcomes, you'll come to a conclusion that it was all for the better. The United States might not be as powerful as it is today if it wasn't for the Jews' impact. Where did this strength come from? Do they bear it because they are truly God's chosen people? One thing is for certain, though. The Jewish Diaspora helped to share a marvelous gift with the whole world. ?? ?? ?? ?? ...read more.