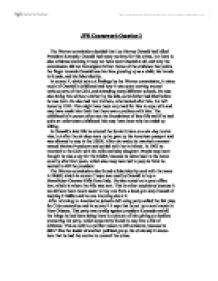 JFK Coursework Question 2 The Warren commission decided that Lee Harvey Oswald had killed President Kennedy. Oswald had many motives for this crime, but there is also evidence showing it may not have been Oswald at all, and why the commission did not investigate further. Some of the evidence that points the finger towards Oswald was his time growing up as a child, his travels to Russia, and his false identity. In source F, which sets out findings by the Warren commission, it states much of Oswald's childhood and how it was spent moving around various parts of the USA, and attending many different schools. He was also doing this without a father by his side, as his father had died before he was born. He also had two brothers, who looked after him, but left home by 1952. This might have been very hard for him to cope with and may have made him think that there was a problem with him. ...read more.

This as well is a perfect reason to kill someone, because he didn't like the leader of another political group. So obviously it shows here that he had the motive to commit the crime. There is however evidence of the Warren commission cutting corners and not doing the whole job properly, for example they were under great pressure to get the job done to meet the deadline of March or April in 1964, also the staff employed for the job were on a part time or temporary basis because it was planned to be a small investigation. After the investigation had been extended many employees did not stay on as they had been offered better jobs somewhere else. All these things I believe made the Warren commission hastily accuse Oswald and did not take in any other information which may have changed there minds about the prosecution of Oswald. Also much of the information retrieved by the warren commission was given by the CIA and the FBI, this means they did not get all of the information available as they didn't ask for it they only took what was provided. ...read more.

These signs of fear obviously meant he was getting nervous and did not know what to do. This irrational behaviour gave the warren commission even more reasons to think it was him who killed the president. In sources E and F it states that Marina, the wife of Oswald, knew he owned a rifle and that it was kept in the garage. When the garage was searched the rifle was missing from the spot she thought it was in. both a next-door neighbour and a co-worker said they saw him carrying a large brown paper bag out with him whilst going to work. To conclude this question, I think there was lots of evidence to back up the Warren committee with their prosecution of Lee Harvey Oswald. Also the committee did not have very much time to finish the investigation and at that time I think most if not all the evidence was pointing towards Oswald, and as he was shot on the journey from the police headquarters to court, we will never no if the decision made by the Warren committee was the right one. James Cook ...read more.