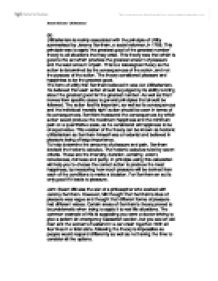 (a) Utilitarianism is mainly associated with the principle of Utility summarised by Jeremy Bentham, a social reformer, in 1768. This principle was to apply 'the greatest good of the greatest number' theory to all situations that may arise. This theory was that which is good is the act which provides the greatest amount of pleasure and the least amount of pain. This is a teleological theory as the action is determined by the consequences of the action, and not the purpose of the action. The theory considered pleasure and happiness to be the greatest good. The form of utility that Bentham believed in was Act Utilitarianism. He believed that each action should be judged by its ability to bring about the greatest good for the greatest number. As well as this it moves from specific cases to general principles that should be followed. The action itself is important, as well as its consequences and the individual 'morally right' action should be seen in terms of its consequences. Bentham measured the consequences by which action would produce the maximum happiness and the minimum pain on a quantitative scale, as he considered all happiness to be of equal value. ...read more.

He thought that the lower pleasures were ones of the body, such as food and sleep, and that the higher pleasures were those of the mind, for example reading poetry. Mill stated that 'It is better to be a human being dissatisfied than a pig satisfied, better to be Socrates dissatisfied than a fool satisfied'. By this he meant that it is better to be unhappy and to have the potential to strive for the higher pleasures as opposed to not having this opportunity and being content with having the lower pleasures. Mill however did not take into account that not everybody would share the same ideas of higher and lower pleasures as he. By using some problems of implementing Bentham's Act utilitarianism, Mill developed his theory, Rule utilitarianism. Unlike Act utilitarianism, Rule moves from general principles to specific actions. Following Rule utilitarianism, general laws and principles should be put first so that it is then known which specific actions are not permitted, such as the example with the guards. Similar to this is the consideration that rule takes priority. For example the law society needs you to tell the truth, means that by telling the truth it will secure the greatest good for the greatest number. ...read more.

The scientist would be able to save the lives of many people so by using the theory you should choose the scientist but with your child being of such great importance to you, as well as your family, it would be a very hard decision to make. As well as this human rights are not taken into consideration at all so following the theory torture would be acceptable if it meant the most pleasure and the least pain. Utilitarianism may be regarded as a strong ethical theory as it helps to teach the difference between right and wrong. Through using the majority of people's happiness as the main factor for a just action, it expresses that decisions made are not just in self best interests. However there are many problems with the theory in that it cannot be applied to real life circumstances, where there may not be the time to come up with a justified argument for or against an action. As well as this not all people will gauge a situation the same, allowing for conflicting opinions of other's wellbeing. The theory can be used effectively as it can encourage people to assess their own actions before making a decision. ?? ?? ?? ?? Jemma Millman- Utilitarianism ...read more.