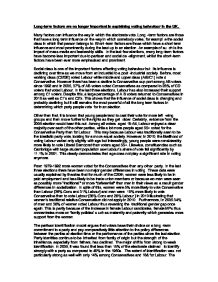 Long-term factors are no longer important in explaining voting behaviour in the UK. Discuss.

Long-term factors are no longer important in explaining voting behaviour in the UK. Many factors can influence the way in which the electorate vote. Long-term factors are those that have a long term influence on the way in which somebody votes, for example the social class in which that person belongs to. Short-term factors are those which have a short term influence and most prominently during the lead up to an election. An example of such is the impact of mass media and leadership skills. In the last few elections, many long-term factors have become less important due to partisan and social de-alignment, whilst the short-term factors have been ever more emphasised and prominent. Social class is one of the important factors affecting voting behaviour but its influence is declining over time as we move from an industrial to a post-industrial society. Before, most working class (C2/DE) voted Labour while middle and upper class (A/B/C1) voted Conservative. However there has been a decline is Conservative support among AB voters since 1992 and in 2005, 37% of AB voters voted Conservatives as compared to 28% of CD voters that voted Labour. ...read more.

Likewise, constituencies such as Cambridge with large student population saw Labour's share of vote fall significantly by 11.1% in 2001. This clearly demonstrates that age does not play a significant role in voting anymore. From 1979-1992 more women voted for the Conservatives than any other party. In the last three elections there have been no major gender differences in voting.These data were usually explained by theories that for much of the C20th, women were less likely to be in paid employment and less likely to be trade union members or because women were seen as possibly more "traditional" or more "deferential" than men in their views as a result gender differences in socialization. In spite of this, women were 5% more likely to vote Conservative than Labour [36% Cons and 31% Labour] and men were 10% more likely to vote Conservative than to vote Labour [38% Cons and 28% Labour ] in 2010 illustrating that women's traditional relative Conservatism did not apply in 2010. Furthermore, in 2005 34% of men and 38% of women voted Labour thus reversing the traditional gender gap once again. ...read more.

Other the other hand, the media can have a significant influence in an election as to many people; the media is their only source of information on political issues. Legally, TV and radio have to be 'non partisan' in their coverage of an election. However, a lot of the coverage is based on the proportion of the vote a party gets and it often decides on what issues they broadcast. This is showed when Labour Party was given a greater time allocation than say the Green Party in general elections. This may encourage voters to switch their votes thus causing a party to either lose or win. This can be proved with the rise of popularity of the Liberal Democrats after the news on TV debate. Likewise, newspapers have the similar effect. For example, the national press can and will openly support a particular party during an election. This was most evident in the 1992 election when 70% of national newspaper readers supported the Conservatives. Also, in 1997, Labour was able to reverse press hostility and 60% of national newspapers advised their readers to vote Labour including The Sun. This resulted with a landslide victory for Labour. ...read more.

4 Stars - An articulate, well structured and intelligently argued essay, which makes excellent use of supporting examples. It strays into generalisations in places, but overall the analysis and the conclusions drawn are logical and sound.