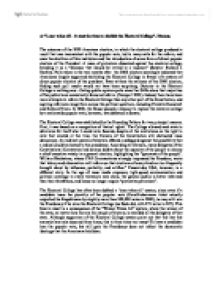 &quot;Loser takes all - it must be time to abolish the Electoral College&quot;. Discuss.

c) "Loser takes all - it must be time to abolish the Electoral College". Discuss. The outcome of the 2000 American election, in which the electoral college produced a result that was inconsistent with the popular vote, led to many calls for the reform, and even the abolition of this institution and the introduction of some form of direct popular election of the President. A mass of protestors dissented against the electoral college, branding it as a "dinosaur that should be retired to a museum" (Senator Richard J. Durbin). Polls taken in the two months after the 2000 election seemingly indicated that Americans largely supported abolishing the Electoral College in favour of a system of direct popular election of the president. Even without the salience of the 2000 election, finding such poll results would not have been surprising. Outcries to the Electoral College is nothing new - Gallup public opinion polls since the 1940s show that majorities of the public have consistently favoured reform. (Newport 2001). Indeed, there have been more attempts to reform the Electoral College than any other part of the Constitution, and aspiring reformers range from across the political spectrum, including Franklin Roosevelt and Richard Nixon. In 1969, the House passed a measure to replace the electoral college by a nationwide popular vote, however, was defeated in Senate. ...read more.

Consequently, critics of the Electoral College suggest the possibility of some enormous mischief by which a significant number of electors would vote for some other candidate, thus frustrating the will of the voters. There have been at least 6 known cases when individual electors failed to vote for the candidate to whom they were pledged - in 1820, 1956, 1960, 1968, 1976 and 1988, although none of the Faithless Electors have affected an election's outcome. Nonetheless, in a tight election, such as in 2000, a Faithless Elector has the potential to undermine a President's legitimacy. If there is no clear majority in an Electoral College election, the House of Representatives has the constitutional right to decide the Presidency. This can be viewed as a threat to the democratic wishes of the people, and further, could again result in a popular vote 'loser' winning the 'ultimate prize'. This situation occurred twice, in 1800 and 1824, and there were fears that the 1968 election could shift in the same direction. Further criticisms targeted at the Electoral College is that it discourages turnout since the election is indirect and many states are invariably uncompetitive. Pre-election polls provide a fairly reasonable indication of the popular vote winner in a particular state, hence many voters believe their effort in voting is futile. ...read more.

By spreading electoral power around to the fifty states, the Electoral College acts as a check and balance in the Constitution against the President. Finally, there is a boost in status of large minority groups, since candidates must claim their support in order to gain a majority. An example of this leverage effect is the choice of Liebermann as Gore's running mate, who helped gain the Jewish vote in New York. In conclusion, the advantages that the Electoral College are endowed with are overshadowed with the disadvantages and controversy that surrounds the present system. However, the fact that chaotic elections, such as Bush-Gore 2000 election, are infrequent, combined with the reluctance of those in power to change a system that conferred that actual power, mean that any constitutional changes would have a struggle being passed. Although I agree with the view that the Electoral College is "an appendage to an anachronism" (Thurber), its roots are too deeply imbedded into the American Constitution. A more realistic solution would be evolution of the system. By allowing states to split their votes by congressional district, and then providing a bonus of two electoral votes to whoever carries the state, the electoral college vote may be brought more in line with the popular vote, as well as increasing the incentive for Presidential candidates to campaign throughout the country. As the Economist concluded, "kicking scapegoats [the Electoral College] is fun. But sometimes gentle reform makes for better government." ...read more.