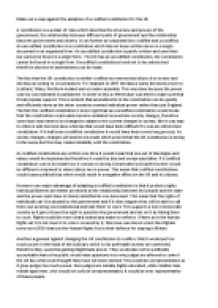 As codified constitutions are written one time it would mean that one set of ideologies and values would be implemented therefore it would be bias and unrepresentative. If a codified constitution was to be made now it consist on strong Conservative principle however would be different compared to when Labour are in power. This mean that codified constitutions would cause political bias which would result in a negative affect on the UK and its citizens. However one major advantage of adapting a codified constitution is that it protects rights. Individual liberties are better protected as the relationship between the people and the state and the power each have id clearly identified in one document. This mean that the rights of individuals can?t be abused by the government and if it does happen they will be able to call them out as being unconstitutional and take them to court. ...read more.

Although, a codified constitution could have an educational value to the UK as would highlight the central values and overall goals of the political system. This would strengthen citizenship as it creates a clear sense of political identity. The public would be better informed in politics leading to an increase in the involvement in politics such as and increase in voting rates and could able create a greater political identity. Although there appears to be various reasons into how beneficial it would be for the UK to adapt to a codified constitution that are many obstacles preventing this from happening therefore it is unlikely to happen. Also creating a codified constitution will arouse augments between parties and keeping our constitution as it seem like a easier option as it would mean it?d be easier to change and society changes with time. Also the issue regarding rights points toward the introduction of the bill of rights. ...read more.