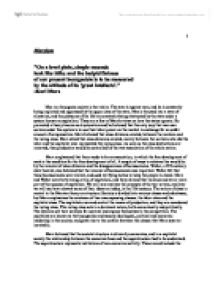 Marxism "On a level plain, simple mounds look like hills; and the insipid flatness of our present bourgeoisie is to be measured by the altitude of its 'great intellects'." -Karl Marx Man in a bourgeois society is the victim. The state is against man, and he is constantly being exploited and oppressed by the upper class of the state. Man is thrusted into a state of alienation, and the pleasures of his life are constantly being obstructed by the state under a system known as capitalism. These are a few of Marx's views on how the states operate. He promoted a theory known as structuralism and he believed that the only way that man can survive under this system is to use their labor power on the market in exchange for an unfair amount of compensation. Marx believed that class divisions existed, between the workers and the ruling class. Marx stated that class divisions existed, mainly between the workers who did the labor and the capitalist who represented the ruling class. As soon as the class distinctions are removed, then production would be controlled by the vast association of the whole nation. Marx emphasized that there needs to be an association, in which the free development of each is the condition for the free development of all. ...read more.

One philosopher, Rudyard Kipling argued that nations are in a permanent struggle for existence. Strong nations who defeated weaker nations in war were superior and therefore fit to survive. There have been several cases in the past that shows the importance of nationalism. One of these cases includes the opposition of Napoleon. After conquering a vast area of Europe, the people among those conquered and allied with Napoleon developed a sense of nationalism. They began to resent paying taxes to France as well as sending soldiers to serve in Napoleon's armies. The people wanted to restore their own government, along with their own customs and traditions. This feeling of nationalism lead to the fall of Napoleon. Nationalism can still be seen today in such cases as that of Saddam Hussein. Saddam Hussein, the Iraqi president, had Iraq invade its tiny neighbor, Kuwait, after talks break down over oil production and debt repayment. He later annexes Kuwait and declares it a 19th province of Iraq. It was believed at this time that Iraq intended to invade Saudi Arabia and take control of the region's oil supplies. He also has implemented sanctions to try and control the imports and exports of his country. After considering these events, it is conceived that the positive form of nationalism should be encouraged within a country's border, however, the government must carefully monitor the situations to ensure they do not take on violent or discriminatory characteristics. ...read more.

Nevertheless, modern idealism generally proposes superhuman mental activity of some sort and ascribes independent reality to certain principles, such as creativity, a force for good, or an absolute truth. Idealism argues that if a society can function on a domestic level through morality and social responsibilities, there is no reason why the same rules cannot be applied atleast to some degree in the international arena. Although idealism speaks of a perfect world and hope and togetherness, one cannot say that they are unnaturally optimistic or exceptionally ignorant. They do understand that there is conflict in the world, but instead of accepting it, they wish to change it. They also realise that life is not a bed of roses and that the world is full of problems, but also know that these issues are not issues a state should face alone or should have to face alone, because these are problems that affect the whole world, like the environment or nuclear testing. All idealism preaches is the concept of one world, a togetherness that supercedes all differences, a sense of collective security and feeling of belonging, not just within ones borders but beyond. 1 Rousseau and Geneva: From the First Discourse to the Social Contract 1749 - 1762 Helena Rosenblatt. Cambridge University Press. May 1997. 2 Webster's New Universal Encyclopedia Barnes & Noble, Inc. Helicon Publishing Ltd. 1997. 3 A. C. Ewing, ed., The Idealist Tradition (1957); G. A. Kelly, Idealism, Politics, and History (1969). ?? ?? ?? ?? 6 1 ...read more.