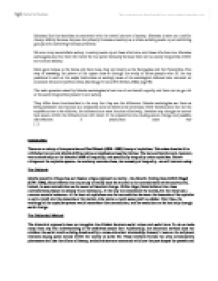 Marxism like functionalism is concerned with the overall picture of society. Marxism is seen as a conflict theory, Mainly because they see the primary interests of society as a whole as being made up of conflicting groups with conflicting interests or beliefs. We are a very materialistic society. A society made up of those who have, and those who have not. Marxists sociologists say that there will never be true social harmony because there are too many inequalities within our cultural society. Marx gave names to the haves and have nots, they are known as the Bourgeoise and the Proletariats. One way of assessing the power of the upper class is through the study of elites (people who fill the top positions in each of the major institutions of society); most of the sociological debates have centered on economic elites and political elites. (Sociology in focus 5th Edition, 2000, page 53) The main question asked by Marxist sociologists is how we all can benefit equally and how can we get rid of the social inequalities present in our society. They differ form functionalists in the way that they see the difference. Marxist sociologists see them as being persistent and not just as a temporary state of affairs to be overcome. ...read more.

Marx understood that inherent within capitalism was also a system of power: it is both economic and political; it both coerces and exploits workers. Actions undertaken in the name of economic necessity disguise political decisions For example, although it is an accepted economic method for dealing with inflation, raising interest rates protects the wealthy, while causing unemployment among the poor. The political decision to privilege the wealthy at the expense of workers is hidden behind economics. Commodities Marx's understanding of commodities (products of labor intended for exchange) is central to understanding his ideas about the nature of capitalism. Commodities produced to subsist and to satisfy their needs have use value. Under capitalism, where workers produce for others and exchange commodities for money, products have exchange value. Because it is often unclear where a commodity's value comes from, it takes on an independent, external reality. Marx called this the fetishism of commodities, when the value of an object or commodity is believed to be tied to something "natural" or independent of human action, such as markets. Thus, the reality that value originates from labor and the satisfaction of needs is obscured. Marx used the term reification to describe the process whereby social structures become naturalized, absolute, independent of human action, and unchangeable. ...read more.

Marx used equality and freedom, our ideas of which stem from the nature of commodity exchange in capitalist society. These mask the fact that we are neither equal with one another nor able to freely control our labor or the products of our labor. Capitalism inverts our notion of equality and freedom: it is capital that is freely and equally exchanged, not individuals who are free and equal. Marx also viewed religion as an ideology. Just as freedom and equality are ideas to be cherished, religion also contains positive dimensions, but it has been used to disguise the true set of relations that undergird capitalism. Criticisms Marx has faced a number of criticisms. Most importantly, actual existing communism failed to fulfill its promise. Though these experiments may have distorted Marx's thought, Marxist theory certainly did not reflect its practice. Second, history has shown that workers have rarely been in the vanguard of revolutionary movements, and indeed have resisted communism in some places. Third, Marx failed to adequately consider gender as factor in the reproduction of labor and commodity production. Fourth, some have accused Marx of focusing far too much on production, without giving enough attention to the act of consumption. Last, Marx's historical materialist approach uncritically accepts Western notions of progress. ...read more.