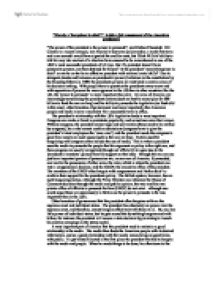 &quot;Merely a 'bargainer in chief'.&quot; Is this a fair assessment of the American president?

"Merely a 'bargainer in chief'." Is this a fair assessment of the American president? "The power of the president is the power to persuade", said Richard Nuestadt. Bill Clinton is a recent example, not America's best ever policy maker, a weak first term and a sex scandal would have signaled the end for most, but 'Slick Willie's' ability to talk his way into and out of a situation have ensured he be remembered as one of the USA's most successful presidents of all time. But if a president doesn't have persuasive powers, are they destined for failure? Is the president 'merely bargainer in chief' or can he or she be an effective president with minimal oratol skills? Due to stringent checks and balances on presidential power (laid down in the constitution by the founding fathers in 1789) the presidents powers are restricted in certain areas of his decision making. ...read more.

The members of the EXOP often bargain with congressmen and 'strike deals' to confirm their support for the presidents policy. The British system, however, has no such bargaining tactics, although the Prime Minister can influence the House of Commons decision through the media and public opinion, the veto and his own private office of officials to persuade for him (EXOP) do not exist - although one could argue these are unnecessary in Britain as the power to persuade is far less important than in the USA. Other branches of government that the president often bargains with are the supreme court and individual states. The president has absolutely no power over the supreme court, and therefore, cannot bargain effectively with them at all. He, too, has little power of individual states, but he gets round this by striking bargains and with bribes, for instance the president will secure a state decision by promising to launch his election campaign in the states capital. ...read more.

President's can do as little or as much as they please, and their appearance and power to persuade the American people is what they are remembered for. In the early 90's (1992 - 1996) Bill Clintons first term was a failure. He promised health and gun reforms among others. 4 years after being elected, he had achieved little, yet he was able to persuade the American people to vote him in again, and in his next 4 years he did make an impact. You can say that it was the economy that got Clinton reelected, it's strength at the time of the election, but it still needed a presentable, articulate persuader to convince the people that he was the man for them. Summing up, I believe there are many factors to being a successful president, and no, not all of them are persuasive ones. However, I believe, to take advantage of the situations you are faced with, as a President you must be able to bargain your way to achieving your goal and getting the very best outcome from the most daunting situation. ...read more.