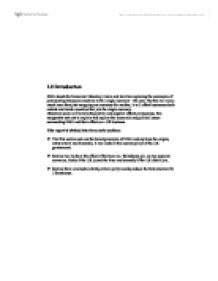 Monetary union will have both positive and negative effects on business, this assignment sets out to explain and explore the economic and political issues surrounding EMU and their effect on a UK business.

1.0 Introduction EMU stands for Economic Monetary Union and involves replacing the currencies of participating European countries with a single currency - the euro. But this will mean much more than just swapping one currency for another, it will affect businesses both outside and inside countries that join the single currency. Monetary union will have both positive and negative effects on business, this assignment sets out to explain and explore the economic and political issues surrounding EMU and their effect on a UK business. This report is divided into three main sections: * The first section sets out the broad principles of EMU and explains the origins, entry criteria and timetable, it also looks at the current policy of the UK government. * Section two looks at the effect of the Euro on J Sainsburys plc. on two separate scenarios, firstly if the UK joined the Euro and secondly if the UK didn't join. * Section three concludes which political party would produce the best situation for J Sainsburys. 1.1 Why have EMU? If you started with �100 in the UK and then went on to visit each EU country exchanging your money for the local currency each time by the time you back to the UK you would have no money left without having spent a penny of it. It would all have been absorbed in bank fees, commission and exchange rate fluctuations between all the member countries. This is the same for European currencies. The potential economic benefit for a single currency is very clear. Economic Monetary Union is designed to maximise the positive effects of having a European single market by permanently fixing exchange rates between European member states and eliminating the expense and problems of exchanging currencies between them. On a more global footing the three major anchor currencies are the US dollar, the Japanese Yen and the German Mark, but the fact that the German Mark lacks the economic weight to support currency shifts between the three has caused problems with the world economy in the form of exchange rate instability. ...read more.

This is the new commitment of the company in the annual report published for 1999. In this report the Chief Executive's review states that "the business has a clear strategy and determination to broaden its appeal, increase efficiency and substantiate its offer". This statement means that the company wants to become more efficient and to make sure that people know that the company means business. When the word Sainsbury is used, people automatically think of the Food Company which for a while used to be the leading food retailer in the country before Tesco overtook them in the race to be the best. J Sainsbury as an organisation own five separate company's which are; Sainsbury's Supermarkets, Shaw's, Sainsbury's Bank, Savacentre and Homebase. All of these companies deal in different types of product such as wood to food. Here in detail are what the companies specialise in. 2.1 J Sainsbury supermarkets J Sainsbury, is a food company, which is the second biggest food retailer in Britain, behind Tesco. They deal with products ranging from frozen food, fresh food and grocery produce. New ideas and ways to do things are changing all the time to keep up with the customers needs so new brands have to be launched such as Food to go which offers a hot chicken and curry bar, pies and roast meats. An increased number of new style salad bars and new packaging for salad pots have also been introduced. Here is a table, which shows a summary of the company: Sainsbury's Supermarkets analysis 1999 1998 Sales (incl. Taxes) �12,096.9m �11,563.8m Operating Profit �714.1m �734.6m No. of Stores 405 391 Sales Area (000 sq. ft) 11,425 10,860 Full Time Employees 39,890 38,416 Part Time Employees 89,798 88,155 The supermarket has several departments within the store such as bakery, fresh meat, bread and the dessert counter. These are the areas that customers like to visit because they appeal to traditional customer's and add value and individual service. ...read more.

Adidas (U.K) Ltd 2. Alba PLC 3. Allied - Domecq PLC 4. Allsports (retail) Ltd 5. Barclays PLC 6. Black & Decker International 7. British Airways PLC 8. Cadbury Schweppes PLC 9. Carlton Communication PLC 10. Cellnet Ltd 11. Manchester United PLC 12. Virgin Atlantic Airways Ltd 13. Tesco PLC 14. J Sainsbury's PLC Tuesday 26 October * We all jointly drafted up the questionnaire and the letter to send to each company * Neil was to type up the letter * Andrew was to type the questionnaire Tuesday 2 November * All checked the questionnaire and letter for any errors * We decided to add stamped addressed envelopes with each letter to encourage some response. * Brought the envelopes and the stamps * Decided to write the stamped addressed envelopes to Neil's house Friday 5 November * Added a photocopy of the assignment to each company * Sent letters Tuesday 16 November * Analysed the replies which we had received * Decided which company we were going to look at in greater depth * We chose J Sainsbury's Thursday 18 November * We decided that Stuart, Neil and Aaron would find out more information on Sainsbury's * Sources used were Sainsbury's financial accounts and Sainsbury's internet site * Stuart, Neil and Aaron were to do part two between them. Tuesday 23 November * Analysed what had been done on part two * Added a few more points * Andrew was to do part three * Neil was to write a brief description on Sainsbury's Friday 26 November * Started to put the whole document together * Decided Aaron would do an introduction to the assignment, Stuart would do any other outstanding parts of the assignment. * Rang up the three main political parties central offices, for their policies on the EMU. Wednesday 1 December * Made all of the work one whole document * Edited it all Thursday 2 December * Rechecked the document and improved its appearance * Made any correction * Got the document binded ...read more.