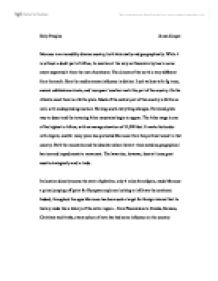 Morocco is an incredibly diverse country, both historically and geographically.

Early Peoples James Cooper Morocco is an incredibly diverse country, both historically and geographically. While it is without a doubt part of Africa, its location at the very northwestern tip has to some extent seperated it from the rest of continent. The climate of the north is very different from the south. Here the mediterranean influence is distinct. Lush valleys with fig trees, ancient cobblestone streets, and 'european' weather mark this part of the country. On the Atlantic coast there is a fertile plain. Much of the central part of the country is fertile as well, with widespread agriculture. Moving south everything changes. Farmland gives way to desert and the towering Atlas mountains begin to appear. The Atlas range is one of the highest in Africa, with an average elevation of 11,000 feet. It marks the border with Algeria, and for many years has protected Morrocco from the political tumult in that country. Both the mountains and the desolate sahara have at times acted as geographical barriers and impediments to movement. ...read more.

These villages "jealously guard their autonomy and resist state authority" (http://ngilegacy.com/amazigh.htm). However, at certain points in history the Berbers have grouped together to form unified kingdoms. Two of the greatest Berber kingdoms were Numidia and Mauretania, located in present day Algeria and Morocco. Numidia was a vibrant civilization by the sixth century B.C when the Phoenicians started arriving. The Phoenecians founded Carthage and it soon grew into a huge port city with a large army. Suprisingly, the Berbers and Carthaginians lived mostly in peace with each other and there was no major conflict. During the Second Punic War between Rome and Carthage, Numidia first allied with Carthage but then wisely switched sides when it looked like Rome was going to win. Mauretania and Numidia came under Roman control in the 2nd century B.C. There was minor resistance but for the most part it was a peaceful and symbiotic relationship, with the Romans allowing the Berbers to continue with their cultural and tribal ways provided they grew food for the Roman armies. ...read more.

With so much great food its no wonder Spain flourished under their rule! In Moorish spain, education was available to everyone - even women. Women became lawyers, professors, doctors, even rulers. The Umayyad dynasty, which ruled from 780-1031 is often credited for taking Europe out of the Dark Ages. Scholors translated thousands of ancient books into Arabic, preserving them from destruction. Scientists made great discoveries in chemistry, astronomy, medicine. Architecture, art, and city planning was refined immensely. This flowering of civilization came abruptly to an end during the Christian crusades. The city of Valencia fell to christendom in 1238, Cordova in 1239, and Seville in 1260. Moors who were not slaughtered for being "infidels" were banished from Spain. Today, those of Berber descent or ethnicity make up anywhere between 60-80% of Morocco's population. Only about half of these people actually identify themselves as Berbers, though. No census has been taken, so it is hard to come up with accurate numbers. Most still live near the mountains in their tight-knit villages. Their oral tradition of spoken poetry is still very much alive as is their art, as evidenced by beautiful woven fabrics and haunting music combining bagpipes, oboe, and African drums. http://ngilegacy.com/amazigh.htm ...read more.