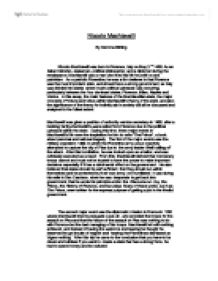 Niccolo Machiavelli By Gemma Stirling Niccolo Machiavelli was born in Florence, Italy on May 3rd 1469. As an Italian historian, statesman, political philosopher, and a diplomat during the renaissance, Machiavelli was a man who lived his life for politics and patriotism. As a patriotic Florentine, he was a firm believer in that Florence was the most important state, and should have a strong government, as Italy was divided into states where much political upheaval was occurring, particularly between the four dominant states; Florence, Milan, Naples and Venice. In this essay, the main features of the Machiavellian state, the major concepts of fortune and virtue within Machiavelli's theory of the state, and also the significance of the theory for individuals in society will all be discussed and analysed to the fullest extent. Machiavelli was given a position of authority-service secretary-in 1498, after a banking family-the Medici's-were exiled from Florence due to the political upheaval within the state. During this time, three major events in Machiavelli's life were the inspiration for him to write "The Prince", a book about personal and national tragedy. The first of the major events was the military scandal in 1499, in which the Florentine army unsuccessfully attempted to capture the city of Pisa due to the army leader Vitelli calling off the attack. After this humiliation, he was looked upon as a traitor, and was ruthlessly executed as a result. ...read more.

Although he was not someone who condoned tyranny within the state by any means, he did however advise strong action be taken against any law breaker whenever necessary. Moreover, he felt it important that he should have a reputation of being honest, so people were able trust him but Machiavelli was very deceitful and cunning as he knew he wanted power so he had to be manipulative to get it. Furthermore, he felt that his state is the organised mass power used by those who control it for the pursuit of ends, which means that those who are in power can manipulate the public through the government in order to gain from it, either personally of politically. In addition, the state gives society its cohesion, individuality and power. According to Machiavelli himself "the state should make itself as strong as possible so that it would not have to depend on others, on allies. It should avoid neutrality and inactivity like the plague". This backs up what has been said, as he clearly states that a state should not be dependent on anyone but it, should aspire to be as strong as possible. In his famous book "the Prince", Machiavelli wrote 'A ruler must learn to be other than good' which is exactly what he has done. Machiavelli teaches that state maximize and secure their power if they rule through fear. ...read more.

Furthermore, it is used to describe the qualities for a man who is ruthless. To do so a man had to be brave have pride, courage and strength. Have all of these did not guarantee success but failure was certain since this meant depending upon fortune. Therefore the only sound, sure and enduring methods of defence and those based on your own virtue. You should be willing to do wrong use force like the lion or the cunning fox when the circumstances are necessary, As Machiavelli said we cannot attribute to fortune or virtue that which is achieved without either. The significance of the theory for individuals in society is that Self interest is eradicated because it is not subject to any rules of ethics. Machiavelli would view individuals as people and not in one large group. This is a controlled risk he takes, although not a good one, that is taken in secrecy without regard for civic responsibility. He endorsed 'good laws' so the rights of the public were still taken into consideration. In conclusion, the key points of Machiavelli's theory of state have been discussed and analysed, which allows us to see that although many of his ideas are ethnically wrong, all he longed for was to unite all of the Italian states, and to protect it from foreign aggressors. In conclusion therefore, this essay shows Machiavelli to be a true patriot, as he craved for his country to be as strong and stable as possible. ...read more.