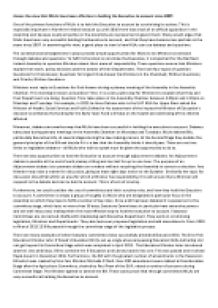 Northern Ireland. Assess the view that MLAs have been effective in holding the Executive to account since 2007.

Transfer-Encoding: chunked ﻿Assess the view that MLAs have been effective in holding the Executive to account since 2007. One of the primary functions of MLAs is to hold the Executive to account by scrutinising its actions. This is especially important in Northern Ireland because up until 2016 there was a lack of an official opposition in the Assembly and because nearly all parties in the Assembly are represented in government. Many would argue that MLAs have been very successful holding the Executive to account, and that they have become less partisan in the years since 2007. In examining this view, a good place to start is how MLAs can use debates and questions. The constitutional arrangements in place provide ample opportunities for MLAs to be effective scrutinisers through debates and questions. To fulfil its function to scrutinise the Executive, it is important for the Northern Ireland Assembly to question Ministers about their areas of responsibility. These questions ensure that Ministers explain their work, policy decisions and the actions of their Departments. There are four types of question: Questions for Oral Answer; Questions for Urgent Oral Answer (to Ministers in the Chamber); Written Questions; and Priority Written Questions. Ministers must reply to Questions for Oral Answer during a plenary meeting of the Assembly in the Assembly Chamber. ...read more.

The Education Minister later introduced another, less ambitious, Bill to combine the 5 Education and Library boards into one. This was passed and received Royal Assent in December 2014. Furthermore, the Bill with the greatest number of amendments is the Reservoirs Bill which was created by Sinn Fein Minister Michelle O?Neill. Over 200 amendments were tabled at Consideration Stage after the Agriculture Committee, chaired by Paul Frew of the DUP, raised a number of concerns during Committee Stage. The Minister agreed to amend the Bill. These cases prove that through committees MLAs are very successful at holding the Executive to account. On the other hand, critics argue that, in practice, MLAs have failed to employ the scrutiny powers they have. Careerism, party loyalty, ignorance and incompetence have all been given as reasons for this failure. For example, MLAs may fear that if they scrutinise the Executive too much, especially if it is a minister from their own party, then they might lose their position in the party or miss out on the opportunity for promotion. It has been argued that MLAs are too self-interested to properly hold the Executive to account, and the recent expenses scandal would be evidence for this. ...read more.

Furthermore, a member of a political party has never challenged another member of their party in the committees. A DUP or SF committee member therefore is highly unlikely to challenge a Minister from their own party. Committees are often engineered to give the Minister 'protection', meaning heavy hitters in the party are brought in to support their Minister. This does not lead to good scrutiny. It is worth noting that ministers in the past have simply ignored committee advice and went on solo runs such as the situation that arose in 2013 over NI Housing. The Social Development Committee launched an Inquiry into allegations arising from a BBC NI Spotlight programme aired on 3 July 2013, of ministerial impropriety or irregularity relating to NI Housing Executive managed contracts. The Minister, Nelson McCausland, supplied the necessary documents but they were heavily redacted (large sections blanked out). This suggests that MLAs were not effective in holding the Executive to account in that case. To conclude, MLAs have gradually become more effective in holding the Executive to account through debating and committees. However, there are still aspects that could be improved, such as the petition of concern. The decision of the UUP and SDLP to go into opposition after the most recent election will bring a new era in holding the Executive to account, but only time will tell how effective this will be. ...read more.