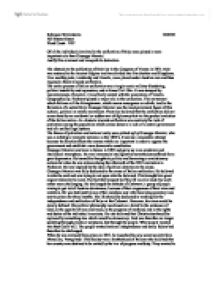 Of all the individuals involved in the unification of Italy, none played a more important role than Giuseppe Mazzini - Justify this comment and vanquish its detractors.

Robinson Wollersheim 16/03/03 AS-History Essay Word Count: 1107 Of all the individuals involved in the unification of Italy, none played a more important role than Giuseppe Mazzini. Justify this comment and vanquish its detractors. The obstacle to the unification of Italy lay in the Congress of Vienna in 1815. Italy was restored to the Ancient R�gime and was divided into five duchies and Kingdoms. Two wealthy parts, Lombardy and Venetia, were placed under Austrian rule and thus imposed a threat towards unification. The entire process of Italian unification was a tragic-comic military blundering, political instability and repression, and at times Civil War. It was stamped by inconveniences. However, it was finally united with the annexation of Venetia. Geographically, Piedmont played a major role in the unification. The movement which Italians call the Risorgimento, which means resurgence or rebirth, lead to the formation of a united Italy. Giuseppe Mazzini was the most prominent figure of this cultural, political as artistic movement. They also believed that the unification did not come about by an accidental or sudden war of diplomacy but via the gradual evolution of the Italian nation. ...read more.

He also believed that Christianity should be replaced by something else which would be democracy. God was therefore no longer speaking through priests or scriptures, but through the people. What people wanted was thus God's will. The people wanted national independence and unity. Rulers had therefore be challenged. When he was released from prison in 1831, he launched his new secret society from Marseilles, Young Italy. This Society was a brotherhood of Italians who believed that her country was destined to be united by the law of progress and duty. They wanted to reconstitute Italy as one free independent nation of equals. It should also be republican and Unitarian. Republican because every country was, by the law of God, to form a community of free and equal brothers and Unitarian because without unity there would be no strength which is needed to unite a country. Further more, the means by which it proposes to reach its aim are education and revolution. These two had to harmonise in the respect of education teaching the necessity of revolution and the revolution being national, as its aims. ...read more.

the demonstrations, attacks and mutinies achieved nothing and ended more or less igonominiously. However, he was admired and gained respect by those whom he met. The nationalist movement in the 1840's was weak due to a diversity of opinion which from a united Italy should take. Mazzini wanted a democratic republic. His opponents favoured the idea of Piedmont leading the other Italian states. Mazzini was elected as the leader, of the Roman Republic Triumvirate, a group of three men were to rule the city. Mazzini gained support by abolishing the detested grain tax which allowed the agricultural sector to grow. This resulted in an enormous increase in his popularity in the Roman Republic. My client was certainly one of the most influential figures in Italian Unification. Through his conviction and passion for his case he mobilised great support. He set up the foundations, intellectually, politically and through his greatest achievement, Young Italy. Life for him would have been easier if he had mobilised the peasants by making agricultural matters more adequate and setting the intellectual standards of his movement lower. Therefore, he can certainly be regarded as the most important figure in Italian unification. ...read more.