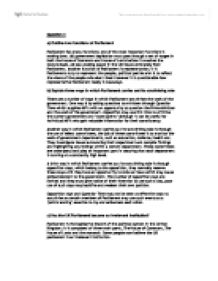 Question 4 a) Outline two functions of Parliament Parliament has many functions; one of the most important functions is making laws. All government legislation must pass through a set of stages in both the House of Commons and House of Lords before it reaches the statute book. All law-making power in the UK issues ultimately from Parliament. Another function of Parliament is representation; it is Parliaments duty to represent the people, political parties aim is to reflect the views of the people who elect them however it is questionable how representative Parliament really is nowadays. b) Explain three ways in which Parliament carries out its scrutinising role There are a number of ways in which Parliament scrutinises the work of the government. One way is by asking questions to ministers through Question Time which supplies MP's with an opportunity to question the Prime Minister and the work of the government. ...read more.

Opposition days and Question Time may not be seen as effective ways to scrutinise as certain members of Parliament may use such events as a 'points scoring' exercise to try and embarrass each other. c) Has the UK Parliament become an irrelevant institution? Parliament is the legislative branch of the political system in the United Kingdom; it is composed of three main parts, The House of Commons, The House of Lords and the monarch. Some people now believe the UK parliament is an irrelevant institution. One reason it is seen as an irrelevant institution is due to inequality in representation. As the Westminster electoral system is majoritarian it tends to result in single party majority hold in the House of Commons and thus a single party government. This means that smaller political parties are under represented despite gaining more votes in recent years; an example of such a party is the Liberal Democrats who have won more votes in each election yet due to the electoral system find themselves with fewer seats than they merit. ...read more.

They argue that Parliament broadly reflects the nation and takes into account those who feel under-represented in Parliament as shown by the passing of the race relations legislation in the 1960 and 1970's. This shows that Parliament is always looking to improve society and make the country more equal so that everyone is treated equally under the government. It can also be argued that The Lords beats the government more regularly than does the Commons and governments often have to conciliate an upper chamber in which they do not have majority control. This view suggests that although Parliament may not be a policy-making legislature, it retains a strong policy-influencing role. In conclusion I believe that although Parliament has become an irrelevant institution to a degree I don't believe it has become fully irrelevant. Parliament is always looking to improve and change it's practices to reflect and suit the current day although due to the loss of certain powers and undemocratic practice this has become increasingly difficult. ...read more.