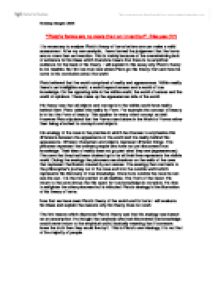 "Plato's forms are no more than an invention". Discuss (17) It is necessary to analyse Plato's theory of forms before one can make a valid assessment. After my own analysis, I have formed the judgement that the forms are no more than an invention. This is mainly because of the overwhelming lack of evidence for his ideas which therefore means that there is no empirical evidence for the basis of his theory. I will explain in this essay why Plato's theory is not feasible. But first we must see where Plato got his theory from and how he came to his conclusion about the world. Plato believed that the world comprised of reality and appearances. Within reality there is an intelligible world, a world beyond senses and a world of true knowledge. On the opposing side is the visible world; the world of senses and the world of opinions. These make up the appearances side of the world. His theory was that all objects and concepts in the visible world have reality behind them. ...read more.

Once he is outside the cave he can see the sun. It is the most perfect of all realities- The Form of the Good. His return to the cave shows that his quest for true knowledge is complete. He tries to enlighten the other prisoners but is ridiculed. Plato's analogy is the illustration of his theory of forms. Now that we have seen Plato's theory of the world and its forms I will evaluate his ideas and explain the reasons why his theory does not work. The first reason which disproves Plato's theory was that his analogy was based on an assumption. He thought that anybody who had discovered true knowledge would never return to the empirical world, basically meaning that if someone knew the truth then they would live by it. This is Plato's own ideology; it is not that of the majority of people. Following on from my previous point is people's acceptance of empirical knowledge. The majority view is that physical existence is real, so therefore nothing can be more real than something being there in front of you, i.e. ...read more.

Plato's belief was that the two worlds were completely different. However he presented them to be very similar in his analogy, for example the sun and the form of the good, being reality, and the form of shadows and fire, being appearances. He could not successfully illustrate that the two worlds were fundamentally different and therefore this is yet another reason for his forms being no more than an invention. Finally and most importantly Plato has no evidence for any of his theories and ideas. He even realised this but says that physical evidence is not required. In effect he is saying that his ideas are non-sensical as they cannot be proved or disproved. So, as one can see there are many reasons why Plato's forms lack substance. They are no more than Plato's own ideology as there is no evidence that there is any such thing as forms of real concepts and objects. Therefore his ideas cannot be proved. This can only lead us to the conclusion that Plato's forms are no more than an invention. ?? ?? ?? ?? Robdeep Sangha L6SB ...read more.