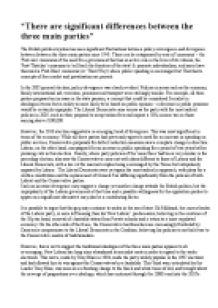 Political divergence between the major parties in modern day Britain

﻿?There are significant differences between the three main parties? The British political system has seen significant fluctuations between policy convergence and divergence between between the three main parties since 1945. These can be categorised by eras of 'consensus' ? the 'Post-war' consensus of the need for a government that has an active role in the lives of its citizens, the 'Post-Thatcher' consensus to 'roll back the frontiers of the state' & promote individualism, and some have theorised a 'Post-Blair' consensus (or 'Third Way') where public spending is encouraged but Thatcherite concepts of free market and privatisation are present. In the 2005 general election, policy divergence was clearly evident. Policies in areas such as the economy, family international aid, terrorism, penisions and transport were strikingly similar. For example, all three parties proposed an increase in the state pension, a concept that could be considered Socialist in ideological terms but in reality is more likely to be based on public opinion ? a decrease in public pensions would be certainly unpopular. ...read more.

The Liberal Democrats were yet again the most radical in approach, with plans for a written constitution and the replacement of Council Tax differing significantly from the policies of both Labout and the Conservative parties. Such an increase divergence may suggest a change yet another change attitude for British politics, but the unpopularity of the Labour government at that time and a possible willingness for the opposition parties to appear as a significant alternative may also be a contributing factor. It is possible to argue that this gap may continue to widen in the near future. Ed Miliband, the current leader of the Labour party, is more left leaning than his 'New Labour' predecessors, believing in the existence of the 50p tax band, removal of charitable status from Private schools and a return to a more regulated economy. ...read more.

At the turn of the millennium, a reformed Conservative party began to emerge. This new Conservative party took a very similar route to new Labour, Cutting its ties with the ideologically driven past and also opting for compromise and pragmatism. An acceptance of things such as the Welfare state as a necessity and the need to protect the NHS bears some similarity to post-War consensus politics of the mid 20th century. Therefore, it can be concluded at present that while there are areas in which party policies are noticeably different, policy convergence is in general much greater than it was during the 1970's & 1980's. The apparent re-emerging trend of divergence in the 2010 election may not mean that this is the direction in which British politics will be heading in the near future or even at the 2015 general election. With ideology being less of an influence on the policies of the three major UK parties then ever before, it is inevitable policies are likely to be similar in some areas. ...read more.